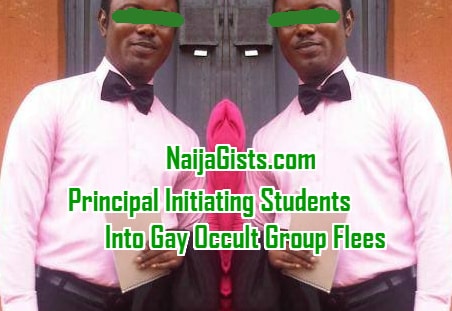 Mr Modestus Eze, an alleged gay principal of Seat of Wisdom Secondary School, Okija, in the Ihiala Local Government Area of Anambra State allegedly operated five shrines and a church within the school.

The accused who escaped being lynched by the community youths on Tuesday after he allegedly had sexual intercourse with a 17-year-old male student of the school, is reportedly on the run.

The Police Public Relations Officer in the state, Mr. Haruna Muhammed, told Punch on Saturday that the principal had yet to be arrested.

Muhammed said, “The suspect is still on the run and efforts are being intensified to arrest him.’’

It was gathered that before the matter went public, the principal was, allegedly, forcefully initiating his students into a gay occult group.

Eze, who doubled as the proprietor and principal of the school, was also allegedly leading a Pentecostal church as well as five shrines on the school premises.

A source, who spoke on condition of anonymity, explained how Eze’s victims were locked up in a room with threats to submit their names in his shrines if they refused or revealed his sexual assault on them.

A victim (name withheld) alleged that he was charmed into submitting to Eze’s sexual desire.

“Our proprietor did something to me and I lost consciousness. When I came home, I discovered that blood was coming out of my anus. It dawned on me that I had been sexually assaulted.

“Five toilets in the school were converted into shrines and sacrificial chambers.”

Mohammed confirmed that Eze was caught having sex with the teenager who attended his school.