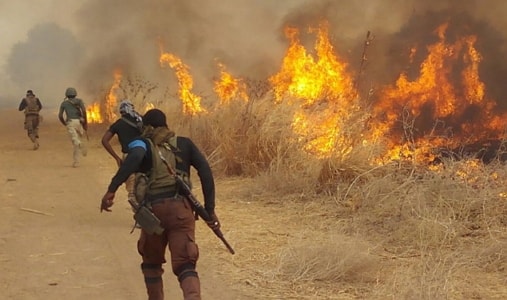 Residents alleged that the deaths arose from a misfiring by the Army’s artillery, but the Army denied the claim.

“The whole of Damboa was shaken by the unfortunate incident. We all scampered for safety as the blasts were coming from different directions. There were bodies everywhere.

“We suspected that the many deaths recorded were as a result of the military artillery.”

“At about 8.30pm on Saturday, an attack suspected to be from an artillery killed 31 innocent people in Damboa Shehuri and Abachari. The attacks came from two separate directions. My house was among those destroyed.”

But Theatre Commander of Operation Lafiya Dole Maj.-Gen. Rogers Nicholas denied the claim, saying the killings were caused by suicide attacks and not military artillery.

“There was nothing like an attack from the military artillery. You can see the pictures of six female bombers who detonated their explosives and as a result, 20 people died while many others were injured.”

The District Head of Damboa, Modu-Zannah Maina, who described the incident as “shocking and disturbing”, said the attack was perpetrated by female suicide bombers.

Maina lamented that most of the victims were children.

“We are in this hospital to check victims of Saturday’s bombing. So far, the victims have been responding to treatment,” he said.