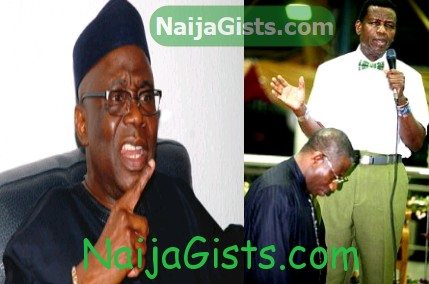 In this recent interview culled from Punch, the founder of the Latter Rain Assembly church in Lagos, Pastor Tunde Bakare has rebuked the President of the Federal Republic of Nigeria, Goodluck Jonathan for publicly kneeling down to pray in front of Pastor E.A Adeboye. naijagists.com

At the recently concluded Holy Ghost Night Service at the Redemption Camp ground, as his annual tradition, President Jonathan went for prayers and he was pictured as he knelt down to pray in front of the man of God.

Pastor Tunde Bakare who rebuked the President said he has publicly disgraced himself and his office for kneeling down to pray in front of Adeboye.

Here is what he said in the interview:

“They have signaled the campaign by going to kneel down before Pastor Adeboye. See, I am not saying that pastors should not pray for presidents, that man was representing an office; a whole nation crumbling before men of God because of political advantage they think they can get. And if the prayer will bail him out, let us wait and see.

The truth is who is preparing for 2015, which faction of the PDP? Is it the (Olusegun) Obasanjo faction? Or IBB faction? Or Jonathan faction? The governors’ faction? Because PDP is a house divided against itself; it’s a chicken that has begun to eat its own intestines.

By going to kneel down in the open before the pastor, the man (Jonathan) did not even recognise the dignity of his office. If it were a private thing, it is okay for you to  crawl or kneel but it is a whole nation. That office has been diminished by a man who does not know the worth of it and does not deserve to stay there for one more day.

But what is the problem here?

Is kneeling down to pray in front of a man of God an offence?