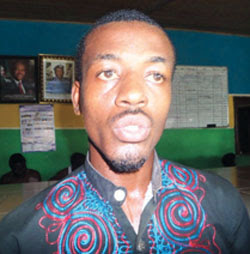 Pictured above is Betel Samuel, a Personal assistant to a Pentecostal pastor in Rivers State who was recently arrested for having forceful carnal knowledge of a 3 year old girl.

The 28-year-old suspect told police officials at Rumuolumeni area of Obio/Akpor LGA of Rivers State how he carried out the evil act.

The suspect begged the police and the parents of the girl for forgiveness.

While blaming stupidity for his selfish act, he urged the Police to release him and give him another chance to make things right.