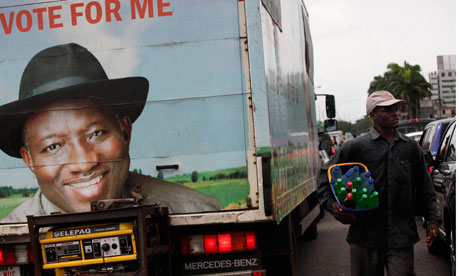 There are indications that the national leadership of the ruling Peoples Democratic Party might have perfected a fresh strategy aimed at stalling the March 28 presidential election.

Investigations by our correspondent in Abuja on Thursday and Friday showed that the ruling party was actually the brain behind those who registered Young Democratic Party and that it may use this new party to achieve its objective.

The new party had on Thursday asked the Independent National Electoral Commission to postpone the forthcoming general elections.

The party said this a day after the Federal High Court in Abuja ordered the commission to register YDP as a political party.

At a press briefing in Abuja, the party called on INEC to re-schedule the general elections if it could not accommodate it on its ballot paper.

It said that contrary to insinuations, the court did not order INEC to only register the party, but added that the commission was ordered to issue certificate and include YDP in the 2015 elections.

National Publicity Secretary of YDP, Mr. Ugo Nwofor, said there were only two options available to INEC, saying the commission could either reprint its ballot papers and include the party with a view to accommodate the party’s candidates or shift the elections.

Nwafor said, “If INEC does not have the appropriation for logistics for reprinting of its ballot papers then INEC ought to within the constitutional provision further re-schedule the general election so as to accommodate our party.

“In either of the two options, our party is ready, it has been a long journey for YDP; we wish INEC would explore the first option.”

Shortly after the press briefing, one of the brains behind the YDP was seen at the national headquarters of the PDP in Abuja on Thursday evening, where he said he had come to confer with some of its officers.

In a confidential discussion with our correspondent, he said he had come to brief the party on the success of their legal work which made the court to order that the new party be registered.

When our correspondent called him on the telephone on Friday whether they were planning a fresh legal option to compel INEC to comply with the court order, he answered in the affirmative.

According to him, “Recall that I was at the national headquarters of the ruling party in Abuja on Thursday where I met our partners. We are working together to move the nation forward and deepen our renascent democracy.

“We have already fixed the dates for our convention and we would pick our presidential and other candidates for the elections. We expect INEC to give us a chance as stated in the court order.”

However, it was learnt that one of the strategies of the ruling party in connection with the YDP is to head for the court and ask that the presidential election be set aside, by pleading that the party was excluded.

“This is what we would do if President Jonathan loses the elections,” a source at the national headquarters of the party added.

But if the president wins, it was gathered that the party would not show any interest in pursuing any case in the court.

Nwofor, however, said that the party was interested in contesting the election, adding that this was in compliance with Sections 85 and 87 of the electoral Act.

“Because of this, the party has fixed its governorship/House of Assembly and Presidential and National Assembly primaries for March 26 and 27 respectively,” he added.

It was gathered that the party cleverly picked the dates in order to make sure that the election slated for March 28 does not hold or to make it have a legal proof for exclusion.

The party was believed to have known that submission of candidates list for elections expired 60 days to the election.

An INEC official said that the “commission and Nigerians are aware of the provision of the law on this.”

He described the Wednesday’s judgement as victory for democracy, rule of law and triumph over impunity.

It was however gathered that the national leadership of the new party was waiting for the commission to reach out to it tomorrow on the judgement.

One of their elders, who spoke with our correspondent, said that “we expect the commission to reach out to us and ask us to send the names of our presidential and other candidates.

“In the alternative, the commission can also reach out to us, discuss with us and we may say that we are not fielding candidates for the Presidential and National Assembly elections, which come up first.

“The result of the discussion will determine what we would do for the governorship and state Houses of Assembly elections, which holds April 11.”

Efforts made to speak with the National Publicity Secretary of the PDP, Mr. Olisa Metuh on the issue failed. He neither picked nor responded to a text message sent to him.