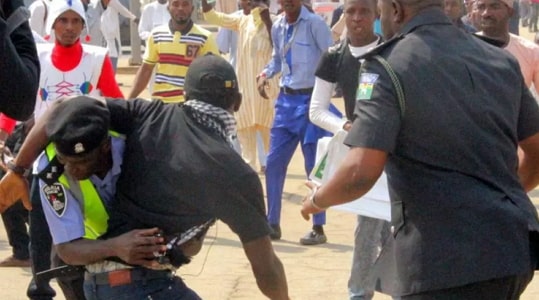 The All Progressives Congress (APC) Kwara chapter on Wednesday said two of its members were shot dead by suspected Peoples Democratic Party (PDP) thugs during a senatorial campaign tour at Ojoku in Oyun Local Government Area.

Oyun is the home town of Senator Rafiu Ibrahim, who is also the PDP senatorial candidate for Kwara South in this Saturday’s National Assembly election.

The attackers were also said to have injured eight APC members and vandalised 20 vehicles belonging to APC Kwara South senatorial candidate, Lola Ashiru, during his campaign tour of Ojoku on Tuesday evening.

But the PDP claimed that the APC thugs first attacked its members where six persons sustained bullet wounds.

“On Tuesday, February 19, the APC senatorial candidate for Kwara South, Lola Ashiru, took his electioneering campaign to Ojoku Ward. In line with tradition, he and his team paid a courtesy visit to the Olojoku of Ojoku in his palace.

“After the courtesy visit to the kabiyesi, the team came out of the palace to proceed to the venue of the rally. They had barely come out of the palace when they were ambushed by PDP thugs who, apparently, had been lurking around the palace. The attackers, who were armed with various weapons, started shooting at the APC members and supporters who accompanied our candidate to the palace.

“The policemen, who accompanied our candidate’s campaign train, tried to repel the attackers but they were massively overwhelmed. Ashiru was quickly taken away from the place and he remained in hiding for over two hours before police reinforcement came to rescue him.

“From all indications, this is a pre-meditated attack, and it is clear that the attackers came not just to disrupt the campaign but to assassinate our candidate. While we mourn our members who died and pray for the quick recovery for the injured, we thank God for saving the life of our candidate who, as I said, was the obvious target of the thugs.

“We were reliably informed that the attack was allegedly coordinated by the PDP candidate for the Kwara South Senatorial District, Senator Rafiu Ibrahim, who hails from the same place (Ojoku) where our members and supporters were attacked.

“We are using this occasion to call on security agencies to immediately arrest all the perpetrators of the violence at Ojoku and bring them to justice. In particular, we demand the immediate arrest and prosecution of the alleged coordinator of the violence, Senator Rafiu Ibrahim.

“We are also reiterating our earlier call on the security agencies to immediately arrest all known thugs and other criminals across our state so that they will not disrupt Saturday’s elections and the subsequent ones. We need to rid Kwara of all thugs and hoodlums in order to encourage the good people of the state to come our in large numbers to exercise their franchise on Saturday, and also to provide a level playing field for all the parties.