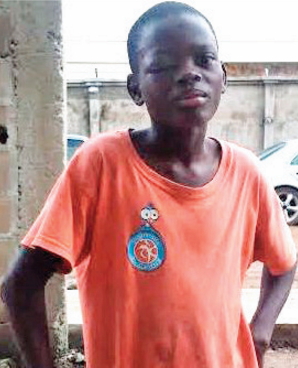 A 12-year-old houseboy, identified simply as Peter, has been blinded by his ‘madam’ at the Ikeja area of Lagos State. It was gathered that residents, who could no longer stand the violence meted out on the boy by his ‘madam,’ decided to raise the alarm. The latest cruelty meted out on Peter, leading to injuring in his eyes, was said to be over improper washing of kettle.

The yet-to-be identified woman resides at No. 14b, Olu Akerele Street, Balogun Bus Stop off Awolowo Way, Ikeja. According to neighbours, how Peter, a Togolese, was employed by the woman was not clear.

What is clear, however, is that Peter was always being subjected to constant beating. A resident, who gave her name simply as Tayo, said: “We feared the unexpected with the manner the woman used to beat the boy. He has a deep sore on his leg. When I asked him about it, he said it was from burnt from fire. He said the swollen eye was caused by beating from his madam for not washing a kettle properly. “He has been subjected to violence for a long time. You know everybody used to mind his or her business in the compound.

When I saw the boy last, he was looking sickly. Hence I decided to seek help from the appropriate agency.” Another resident, who pleaded anonymity, said the woman was well known for being violent. He said everyone on the street used to keep the woman at arm’s length. He added: “If the boy comes to watch television with them in the parlor, he would be beaten.

On school days, you will see the boy leaving home around 9.30a.m. This is an ideal case of child abuse and child labour. We need the intervention of child protection network in his case.”