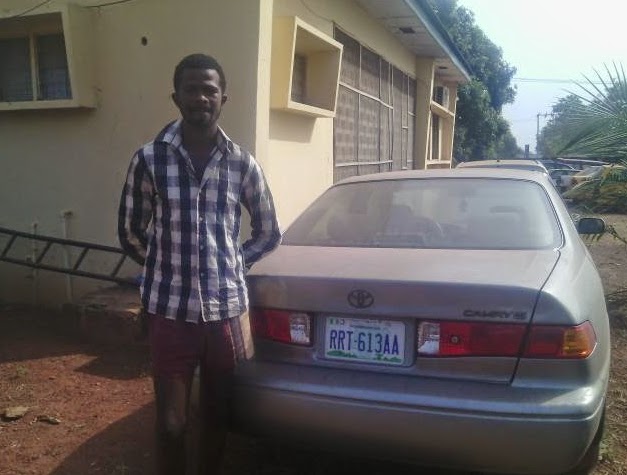 Dec 22, 2014 – Picture: Abia State University, ABSU Graduate Arrested For Snatching Car Promises To Give Thanks In Church If Released

The operatives of the Anti Kidnap Unit of the Enugu State Police Command has arrested a suspected car snatcher, identified as Amucha Chike.

The suspect has, however, promised to attend a thanksgiving church service and embrace God if released.

Chike, 27, who said he is a graduate of Agriculture Economics from Abia State University, Uturu, and has participated in the National Youth Service Corps programme, is blaming the devil for his ill-fated venture into crime.

The suspect, who hails from the Isiala Mbano Local Government Area of Imo State, said he wished to use his university degree to seek an honest living.

The Public Relations Officer of the Enugu State Police Command, Ebere Amaraizu, explained that Chike had on June 16, 2014, snatched a Toyota Camry at Independence Layout, Enugu, after the owner left the key in the ignition after parking to open his gate.

Chike allegedly jumped into the car and drove off, warning a lady who was inside the vehicle to lie down, or he would shoot her dead.

The said lady was eventually dropped along the way, before Chike proceeded to Owerri, Imo State, where he kept the car in a dealer shop, before selling it for N700,000.

Having sold the car, Chike moved to Benin City, Edo State, to relax and enjoy the proceeds of the stolen car, but unknown to him, the police were already on his trail.

He was eventually arrested on November 29 in Edo State, while having dinner in an undisclosed restaurant.

Following his arrest, the stolen vehicle was recovered.

Chike, who is currently helping the police in their investigations, urged youths to avoid crime.

He said, “I am ashamed of myself. I am still surprised at how the police traced me to Edo State and arrested me.

“Youths should eschew all manner of crimes and criminality and embrace good virtues and God will embrace them someday but involvement in crime and criminality will destroy their future.”

The suspect added that he needed prayers and deliverance.