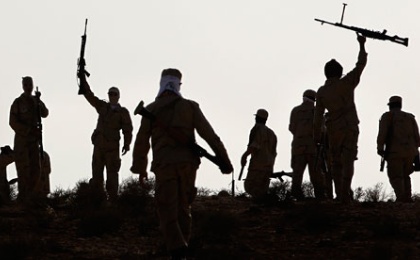 AP — Nigeria’s Boko Haram extremists are strengthening ties with the Islamic State group, as shown by reports that Nigerian militants are fighting in Libya, recent arrests in Lebanon and India and the blocking of thousands of suspected extremists from leaving Nigeria.

Boko Haram pledged allegiance to IS in March and in June was declared its West African province. More than 1,000 people have been killed in the insurgency since President Muhammad Buhari was elected in March and pledged to halt the six-year-old Islamic uprising blamed for the deaths of some 20,000.

An estimated 80 to 200 Boko Haram fighters are in the Libyan city of Sirte, according to Nigeria analyst Jacob Zenn, in The Sentinel magazine of the Washington-based Jamestown Foundation.

“The openness of migration routes from Nigeria through eastern Niger to Libya makes travel … fairly straightforward, and the Islamic State can easily afford to pay smugglers to carry militants (and weapons) along that route,” wrote Zenn.

Further evidence of Boko Haram’s links with IS is the arrest on August 15 by Lebanese authorities of hard-line IS cleric Ahmad al-Assir at Beirut airport.

They said he planned to fly to Nigeria on a forged Palestinian passport with a Nigerian visa.

The Nigeria Immigration Service reported barring 23,472 people from leaving the country between January 2014 and March 2015. “There have been reports in recent times of some Nigerians departing to join terrorist groups especially in the Middle East and North Africa,” said PR Nigeria, which publishes government news.

Two Nigerians studying in India were arrested August 7 as they tried to cross illegally into Pakistan, planning to join IS in Iraq, it said.