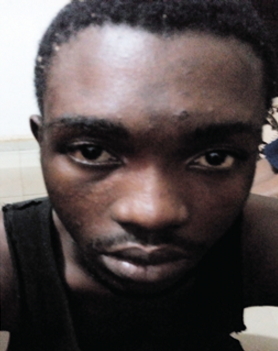 A young man who identified himself as a gospel singer was last Sunday caught at the premises of Winners Chapel Ota Ogun state while trying to steal an SUV.

The suspect 22-year-old Sunday Samuel was caught while trying to disable the security device on the Sport Utility Vehicle parked at the church premises.

The owner apparently forgot her gate pass inside the car when the one-chance robber spotted it.

He managed to start the ignition but couldn’t drive the car because the security device couldn’t be hacked.

To cut the long story short, the owner met him there and when she asked him to identify himself, he said “I have lost my car key”.

The woman immediately went to report him to the Church’s security department who later contacted policemen at Obasanjo Police Station who came over to arrest him.

After his arrest, Sunday blamed his action on the devil and the early death of his father.

He described himself as a gospel singer planning to take the stolen car to his mother’s house in Ajah Lagos.

Police recovered several wraps of Indian hemp from the suspect who is currently cooling off in detention.