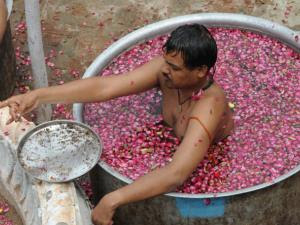 Some Women in northern India bathe a police officer in an unusual attempt to appease the rain gods, officials and news reports said on Friday.

Groups of women reached a police station in a village in Uttar Pradesh state earlier this week with buckets of water and mugs asking the police chief to come out for a bath.
Villagers believe that if the ruler or king of the region is bathed publicly by women, the area receives rains and tides over a drought-like situation.

“Since there are no kings now, we asked the station house officer of the police station to participate in the ritual,” a local resident was quoted as saying by the Asian Age newspaper.
“We also requested him not to accept bribe for at least three days following the ritual,” she said in a jibe, referring to widespread government corruption.
Police officer Ranvijay Singh said he was shocked and rejected their demand but gave in after some women started crying and pleading.

“It may be a superstition but one has to respect people’s beliefs. I sat quietly outside in the police campus while the women splashed water on me,” he said in a phone interview.
The women later went to a temple to offer prayers and it rained three hours after the ritual, the report said.

Locals said scanty rains led to crop damage and shortage of drinking water.
Such bizarre rituals to please the rain gods are not uncommon in India. These include women ploughing fields naked at midnight or marrying off donkeys in elaborate ceremonies.