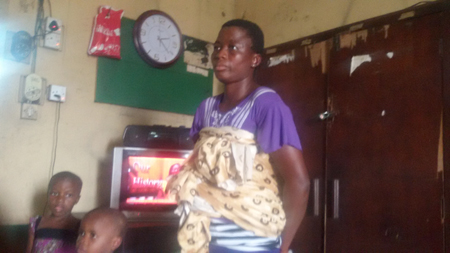 But for the ceaseless crying of a four-month-old baby yesterday, three children may have ended up in a kidnappers’ den.

The cry of the baby, carried by Eno, the suspected kidnapper, who was accompanied by a teenager, inside an Iddo, Lagos-bound Bus Rapid Transport (BRT) vehicle, attracted other passengers.

With the woman and the teenager, a girl, were two other children—Happiness Effiong (four) and her sister, Patience (two). They claimed that all three were Eno’s children.

Worried by the baby’s cry, other women inside the bus asked Eno to breastfeed her.

But she refused. She was also unable to pet the baby to stop crying.

Suspecting her, the passengers were said to have alerted men of Iddo Police Station, Railway Terminus, who promptly arrested her and her accomplice.

At the police station, Eno again refused all entreaties to breastfeed the baby. Instead, she brought out a feeding bottle containing an orange-colour watery substance, which the baby refused to take.

Eno, who initially told the police that she lives at Iyana-Oba, Majidun in Ikorodu, later said she stays at Igando.

Asked for her husband’s phone number, she claimed she does not know it, adding that she does not have a phone.

The teenager, who she claimed to be her sister, was asked to use her own phone to call any of their family members to confirm Eno’s statement.

The unsatisfactory response from their supposed brother, who she called, prompted the police to detain them.

Although the suspects insisted Eno is the children’s mother, Happiness denied knowing either of them.

Happiness said she lives at the Air Force Base, Ikeja and gave her father’s name as Effiong. She said they were taken from their home by the woman.

“That woman is not my mother. My name is Happiness. This is my sister Patience. My daddy’s name is Effiong. He is at the Air Force Base.

Eno again changed her story, saying the children’s father is one Effiong who works as a cleaner at the Air Force Base.

She claimed Happiness rejected her because she was arrested by the Task Force on Environment few months after she gave birth to her, adding that the girl doesn’t really know her.

“They are my children, I am their mother. If you think I am lying, let us go to the Air Force Base and meet their father.

“I was arrested by former Lagos State Governor Babatunde Fashola when she (Happiness) was like this baby I am carrying now. Their father signed the paper for Fashola to take me away.

“It was while I was with Fashola that I gave birth to this one (Patience) and this one I’m carrying now is four months old. I have five children, two with another man and these three with Effiong,” she claimed.

According to police investigation, the newly hired maid kidnapped the children in a bid to collect huge ransom from their parents.

The children have been reconnected with their parents.

Stay in touch for more details