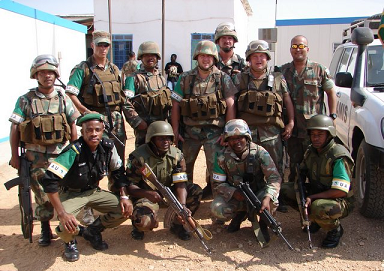 Foreign soldiers have joined the battle against insurgency in Northern Nigeria.

According to top military sources, apart from troops from Niger and Chad currently working with the Nigerian miltitary , troops from South Africa and other foreign countries have started engaging in ground and air combat against Boko Haram sect.

In an exclusive chat with VOA on Wednesday, President Jonathan claimed that the foreign troops were brought in as technicians and advisers but the Nigerian soldiers say many of these soldiers were participating in actual combat.