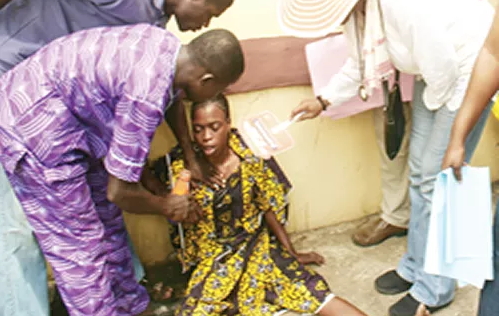 A woman fainted on Sunday in front of the office of Lagos State Governor, Akinwunmi Ambode, while protesting the abduction of her husband as well as the strangulating hold of kidnappers on Epe residents and farmers.

The victim was among hundreds of Epe farmers, who thronged Ambode’s office, protesting continual abduction of their members by kidnappers.

The protesters said that over 50 farmers had so far been kidnapped and millions of naira paid as ransom to regain their freedom.

The woman is said to be the wife of one of the seven victims abducted on February 14. Her husband and six others are still in the captivity of the kidnappers.

The abductors demanded N350 million before they would release the hostages. On Saturday, the kidnappers threatened to kill the seven victims because the ransom was being delayed.

The farmers said they were sad because the government had not taken a decisive action to stem the spiraling tide of kidnapping in the axis. According to them, armed abductors frequently storm their farms located on Igbodu-Ishiwo Road to kidnap their colleagues at will.

Continue Reading
You may also like...
Related Topics:abduction, woman