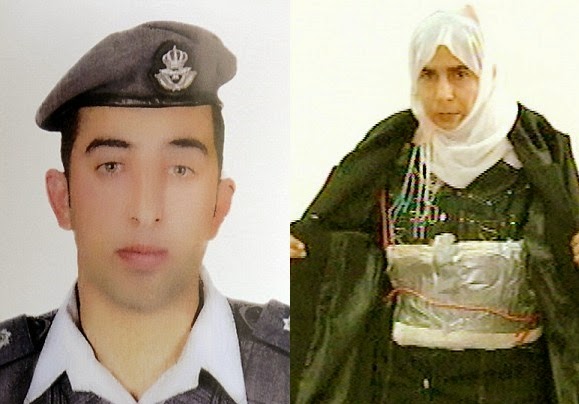 Jordan has retaliated the brutal murder of its pilot captured alive by ISIS after a plane crash last year.

Today, the 2 jihadists (including a female al-Qaeda operative) linked to ISIS imprisoned in Jordan were executed in retaliation for the pilot burnt to death in a cage by ISIS yesterday.

Jordan vowed a swift and lethal response and government officials this morning revealed that two prisoners, Sajida al-Rishawi and Ziad al-Karbouli, have already been executed.

The chilling footage, entitled ‘Healing the Believers’ Chests’, shows the captured airman wearing an orange jumpsuit and seemingly doused in fuel as a trail of petrol leading up to the iron bars of the cage is seen being set alight. Flames are seen quickly spreading across the dirt to the cage, where they completely engulf the helpless pilot in images that are far too distressing to publish. Extremists pour debris, including broken masonry, over the cage, which is then flattened by a bulldozer.

Jordan has vowed to execute more prisoners convicted of associating with ISIS today.