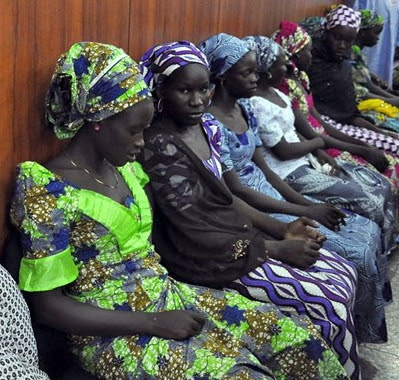 Freedom for the 21 Chibok girls released last week by Boko Haram was as dramatic as their seizure by the group over two years ago.

Nothing on Wednesday, October 12, the eve of their release, suggested to them that the freedom they had longed and prayed for was around the corner.

Their abductors simply woke them up early in the morning and got them lined up ,according to a report yesterday by the CNN quoting a parent of one of the girls.

Then, the terrorists began to read out the names of the girls one by one.

What followed was the news that they would be returning home to their loved ones.Just like that.

The parent, who asked not to be named for safety concerns, also said that during their time with Boko Haram, the girls were forced to build their own basic shelter, using plastic bags for roofing.

One of the Chibok schoolgirls, who refused to marry a Boko Haram fighter, was told she would be killed. Her abductors had a change of heart and commuted her sentence to 100 lashes.