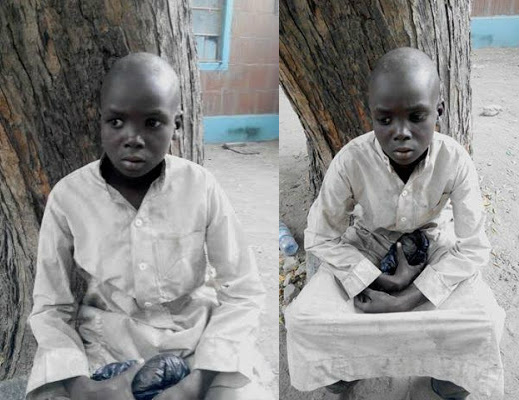 The statement added that the suspect, who was among four other minors trained in the act of suicide bombing, disclosed the identity of a senior suspected insurgent in the same camp.
“Vigilant troops of 7 Division Garrison providing security at Internally Displaced Persons (IDP) Camp, Dalori in Maiduguri Metropolitan Council, Borno State yesterday Tuesday afternoon apprehended an 11-year-old boy, Master Usman Modu Tella a potential suicide bomber. He is suspect number 82 on the poster containing the photographs of 100 wanted suspected Boko Haram terrorists released by the Nigerian Army.

“Preliminary investigation revealed that the suspect was from Bama town and is among 4 other children trained for suicide bombing by the Boko Haram terrorists. He further added that the 3 others have already carried out their missions at different locations. His job was to do same in the camp sometime in the future.
“The boy also pointed out one other Boko Haram senior member, Alhaji Kerewu Abubakar at the camp.

“It will be recalled that due to the concerted efforts of the military quite a number of towns and villages hitherto held by the Boko Haram terrorists were liberated, this brought about an unprecedented influx of IDPs to the camp which the terrorists took advantage and infiltrate in order to wreck more havoc among the society. The case of these suspects clearly indicated this point hence the need for proper screening of all IDPs with a view to ascertain their true identity,” the statement read in part.