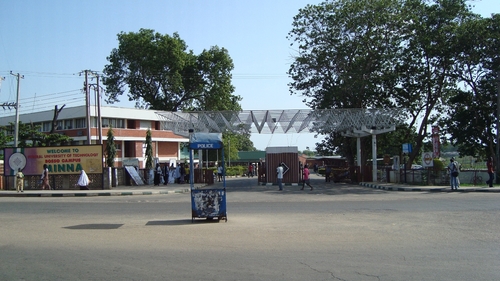 Barely 24 hours after a female bomber struck at the Federal College of Education, Kontagora, Niger State, there was another attempt yesterday by two male suicide bombers to hit the Maryam Babangida Science Girls College, Minna.

However, the mission was foiled through a female teacher of the school who raised the alarm over the suspicious movement of the suspects near the gate of the school.

The suspects were seen close to the school gate around 7.30am when the students were preparing for the assembly.

A female teacher heading for the assembly who was not comfortable with their movement accosted one of them and they in return threatened the teacher who later raised the alarm.

When Daily Sun visited the school, security had already been beefed up with the main gate locked and movement restricted with those coming in thoroughly searched.

At the premises of the school, a pickup van with about seven military men fully armed and men of the State Security Service (SSS), some officials of the Parents Teachers Association of the college, officials from the state Ministry of Education, the school principal and few members of staff were seen under the tree in front of the Principal’s office discussing the issue.

The female teacher (name withheld) shared her experience: “On my way to the school, I saw one of these suspects who pretended as if he was defecating. After a close watch, I saw him wearing a pair of trouser which is the colour of our school and later saw him bring out an Hijab which he eventually put on to disguise as a female student.

“As I was approaching him, my phone rang and this alerted him and he confronted me of where I was going. When I told him that I was going to school, he ordered me in Hausa to go back home. That there wont be classes and that I should not even risk my life going to the school today (yesterday).”

At that moment, out of fear, said she quickly off her shoes, took to her heels and headed for the school and raised the alarm. The school authorities immediately swung into action.

Principal of the school, Hajiya Fatima Madugu, told Daily Sun: “Just help us thank God for the alertness of our staff and intervention from God. The mission of the suspects was to disguise as one of our students and sneak to the Assembly ground to carry out their dastardly act.

“But God just intervened and before we could mobilise to the scene, the two men had fled without traces. We immediately alerted the police and other security agents who mobilised to our compound immediately.”

The state police spokesman, DSP Ibrahim Gambari, confirmed the incident. He said the attempt should not be seen as an invasion by Boko Haram:

“The person being suspected could be a lunatic but not withstanding, our men have been drafted to the school for further investigations I can tell you that the bush around the school has been combed and nothing incriminating found and no arrest made.”

More in Beauty Of The Day Nigeria