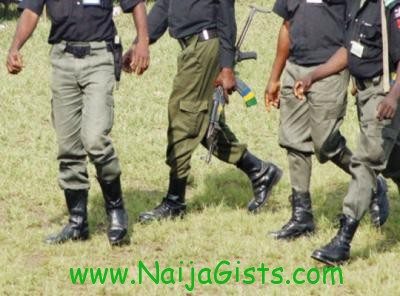 According to a reliable source and a neighbour to the family of the girl, who spoke to journalists on condition of anonymity, said that the police corporal who also lived in the same neighbourhood with the little girl performed the dastardly act around 10 o’clock on Sunday morning in his shop which also doubles as his bedroom.

He said, “That morning I was cleaning my house when the mother of the girl rushed out in tears, saying that Irimiya has destroyed her life. Other neighbours and I rushed out to find out what was happening and we saw her holding her little daughter who was also crying. She informed us that Irimiya raped her daughter and the women folk immediately took the girl and started examining her while we proceeded to interrogate Irimiya. The mother told us that she and her daughter visited a relative in the morning who gave them some local nuts (gurjiya). She asked the little girl to take some to Irimiya who is a close family friend in his shop.

After sometime, she did not see her daughter; she came out to check the little girl. She found Irimiya’s shop locked and she thought that he went out and the girl was playing in the neighbourhood. The mother searched round the neighbourhood without success. While on her way back to the house, she saw Irimiya opening his door and the little girl emerged crying.

At this point the mother was even jokingly asking Irimiya why is the girl crying but he just smiled. The girl kept crying and telling her mother that he rubbed red oil on her buttocks and to her shock when she checked, she saw sperm on the little girl’s clothes.”

The source also said that they took the little girl to the police station and the DPO ordered the arrest and interrogation of Irimiya. “The DPO gave us policemen who escorted us to the hospital and a series of tests were carried out which confirmed that the girl was raped on Sunday. On Monday, the DPO sent for another round of test and result also showed that the girl was raped. Although Irimiya is still denying it, we are waiting for the final report to be compiled before the cases continue”.

Another source at the police station confirmed the arrest of Corporal Irimiya Musa on Sunday, and said investigation is still on going on the matter. Our correspondent could not reach Kano’s police Command Acting PRO, ASP Muhammad Al-Awal for his comment.

This is disheartening. Why o why ?