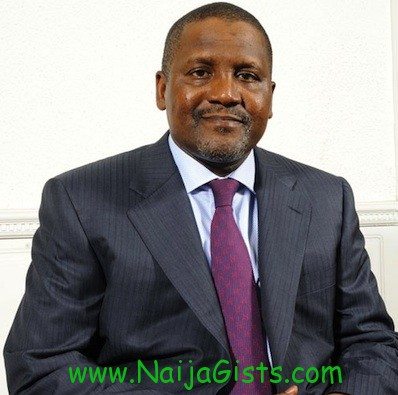 According to Forbes 2011‘s List of the Richest Black People in The World, Nigerian Billionaire, Aliko Dangote is number one.

As at now, he is the richest black man in the world. Alhaji Aliko Dangote is not new from making world headlines. His name has significantly become a recurring decimal in the country’s business arena. Aliko has also expanded his frontier from Nigeria to entire African region where he now enjoys a leading position in the area of manufacturing. Just last week, the federal government announced his name among top Nigerians to be honoured in this year national honour award. He is to be conferred with Grand Commander of Niger GCON. Having been a grand commander in business, especially in cement, sugar and flour, the honour did not come to many as a surprise; rather it complements his status as true business mogul of our time.

The award is the country’s second highest national honor, after the Grand Commander of the Federal Republic (GCFR) – an award which is only reserved for Nigerian Presidents and Heads of state. Dangote becomes the first individual outside government to receive the nation’s second highest national honor. In the past, the GCON has only been awarded to Vice-Presidents, Chief Justices of the country and Senate Presidents. Dangote’s GCON award according to information is in recognition of the immense contributions he has made to the economic development of Nigeria.

It is on record today that Aliko was the first Nigerian to enter the Forbes list of billionaires and was also adjudged the richest man in Africa.

Aliko Dangote made his name in commodity trading especially sugar importation into Nigeria which he admits he controls over 60 per cent today. Given the heavy demand by Nigeria’s breweries and confectionery industries for sugar, he makes a kill by doing volume business and gaining advantages to undercut competitions. Dispelling rumours of his cornering the market with the connivance of government support, he says it is an open market but because of his enormous investment in the business and his transport haulage business, he can distribute his sugar faster, cheaper and at a uniform prize nationwide which the competitions cannot match. Dangote is reputed to have good investments even in foreign-based sugar refineries that supply him.

His business interest spans the export. He exports cashew nuts, cotton, cocoa, millet ad textile. His extensive network enables him to source these commodities not only in Nigeria but the entire west coast of Africa where he is increasingly becoming a visible player. He also exports fish. Interestingly, he started out importing fish but when the local market proved difficult and less profitable, he diverted his supplies to the export market.(naijagists.com)

Dangote also imports and sells rice, vegetable oil, and cement. He employs similar strategies in the distribution of these commodities as in the sugar business. In December 1996, Dangote says, in response to a mandate from government, he imported and sold so much rice that the local market crashed by almost 80 per cent.
In the 1980s, Dangote decided to move from being just a successful commodity dealer to a more rounded entrepreneur with solid investments in finance and manufacturing. His style was acquisition and buying into existing companies. naijagists.com

He started out with Dangote General Textile Products which he acquired from its former owners thereby establishing control over the source of his trade. In 1993, he acquired controlling shares in the Lagos-based Nigerian Textile Mills. He invested enormous resources in re-capitalising, refurbishing its machinery and restructuring its management. And within a few years, he turned it from a loss maker back to its days of good profits. Looking beyond just making and exporting textile materials, the Dangote Group is exploring opportunities to manufacture jeans materials for the export market. Even in sugar, Dangote currently has a joint venture with a Pakistani firm to set up a refinery in Nigeria to locally make sugar to cap his years of sugar business. Dangote bought controlling shares of the Nigerian Salt Company to broaden his investment portfolio. With this, National Salt has become a dominant player in the Nigeria’s salt market.
Alhaji Dangote founded the Dangote Group, which he currently presides over as President and Chief Executive. Currently, the Dangote Group has 13 subsidiaries spread all over Nigeria. The subsidiaries include cement, sugar, salt, flour, pasta, noodles, poly products, logistics, real estate, telecommunications, steel, oil and gas and beverages. The Group operates in 14 African countries including Senegal, Zambia, Tanzania, South Africa, Congo (Brazzaville), Ethiopia, Cameroun, Sierra Leone, Cote d’Ivoire, Liberia and Ghana, among others. The Group, whose core business focus is to provide local, value-added products and services that meet the ‘basic needs’ of the Nigerian population, recorded a turnover in excess of $3 billion (N450 billion) in 2010. naijagists.com

The Dangote Group has risen from its humble beginnings to win several awards-both locally and internationally. Last year, Dangote Cement Plc, one of the four listed subsidiaries of the Group, made history when it became the largest quoted company in the country, following its historic merger with sister company Benue Cement Company Plc (BCC) and the eventual listing of the emergent company on the Nigerian Stock Exchange (NSE). The Dangote Group was rated among Top 40 African Challengers in 2010 by the Boston Consulting Group (BCG) and was also adjudged the Investor of the Year 2010 by the Nigerian Investment Promotion Commission (NIPC) and the Commonwealth Business Council (CBC). Read Aliko Dangote’s Biography

What an achievement. This man is not a university graduate yet he is now the richest black person in the world.

Inconclusion, education is never a barrier to success in life. The only barrier is our state of mind.