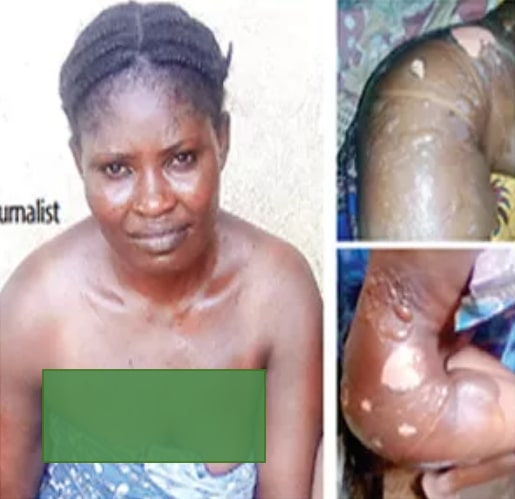 Policeman’s Wife Who Poured Hot Water On Neighbour For Greeting Her Husband In Agege Lagos Arrested!

A troublesome woman identified as Josephine Tiyiose has been arrested for bathing her neighbour , Blessing Christopher with hot water just because she greeted her husband against her advice.

Days after the attack, co-tenants in the building where Josephine live with her police husband, Mr. Tiyiose, described her as troublesome.

Blessing, a worker with the Lagos State Waste Management Authority (LAWMA), incurred the wrath of Josephine on the night of March 26 at Agbotikuyo, Agege area of Lagos State.
A neighbour, who refused to give his name, said that avoiding Josephine was the beginning of wisdom and peace in the compound.

“The woman is like a tiger roaring and searching for a prey to devour. If you want peace in this compound, you better avoid Iyawo Olopa (policeman’s wife). Her husband is a policeman and because of that, nobody is somebody in this compound. Many people have left this house because of the woman and her husband. Her husband is not even helping matters. If there’s an issue with any tenant in the compound, and the person reports to her husband, the man will mock you right before his wife.”

“Her husband has been boasting in the compound, saying that he has money and is ready to make case. Not too long ago, the couple fought a neighbour and the husband said if the matter was taken to the police station; it would only cost him money.”

Among Josephine’s alleged crime in the compound, was her mockery of women searching for the fruit of the womb.

Blessing, recounting the event of that fateful night, explained that she was preparing dinner when the policeman walked into the kitchen. It was the policeman who first greeted Blessing and she responded.

Immediately Blessing responded, Josephine rushed out to confront her.

Blessing recalled: “She warned me never to greet her husband. She said that if I tried it again, she would deal with me. I asked when it has become a crime to respond to greetings. She said that I should wait for her. I continued with my cooking. A few minutes later, I saw her with a pot; she hurried towards me. Her husband tried to block her from reaching me, but she went behind me and poured hot water on my back.”

Blessing, who was writhing in pain, was in bed when our correspondent went to speak with her. She added: “Since she poured hot water on me, I have been in pains. The worst situation is that my husband and I don’t have enough money to pay for my medical treatment.

I don’t know what I did to that woman. We don’t even have any issue. We are just four months old in the compound. We later heard that most tenants who had moved out of the compound, left because of the woman’s troublesome nature.”

Blessing said that since Josephine poured hot water on her, she had not been able to take care of her twins. The twins are just two years old. Her husband was forced to stop going to work in order to mind the kids.

The victim’s husband, Onah, said that the day the incident occurred; he was called back from his place of work.

He said: “When I got the call, I rushed home and took my wife to a nearby hospital. I later went to the police station. Police gave me a note to take my wife to the General Hospital for treatment.

The hospital collected over N100,000. I took loans from friends and relations to treat my wife. I am appealing to good Nigerians to assist me. I cannot go to work again, because I’m taking care of my wife and children at home.

“I asked other neighbours to tell me what really went wrong between my wife and Josephine. Neighbours said that they saw my wife exchanging words with the woman. And before one could say Jack Robison, Josephine ran into her apartment, brought out hot water and poured it on my wife. I learnt that her husband was there when the incident occurred.”

Josephine was also alleged to have, sometimes ago, hit the head of another man in the compound identified as Mr. Emmanuel Ucheonye (51) with iron, landing him in hospital.

Ucheonye noted that one fateful day, the policeman slapped him twice, while the wife broke his head.

Recollecting the event of that day, Ucheonye said:

“I was at my work place when my wife called that Josephine was threatening to beat her up. I returned home. I went to the woman in an attempt to find what the trouble was between her and my wife. The husband suddenly came behind me and gave me two ‘hot’ slaps, while the wife hit me with an iron and I fainted. I woke up in hospital the next day. I went to police station to report and nothing was done about the matter. Since then, everyone in this compound has been avoiding them.”

When our correspondent went to Tiyiose to hear his story concerning allegations made against him and his wife, the policeman insisted that the correspondent must first write his full names and office address in a paper. He demanded to know how much the other tenants paid the journalist to write the story of him and his wife terrorising their fellow tenants.

According to him, what happened between his wife and Blessing, leading to his wife pouring hot water on Blessing was a mere misunderstanding.

“What if the other woman had used dagger to kill my wife? I didn’t know my wife will pour hot water on the woman. Do you know that women are too jealous? When men go to work, they will be at home fighting each other out of jealous.”

Tiyiose declined to give the correspondent his full names or phone number, but told the journalist to go home.

“My brother go home and take care of your family. We don’t like people to die. I will call you as you give me your number.”