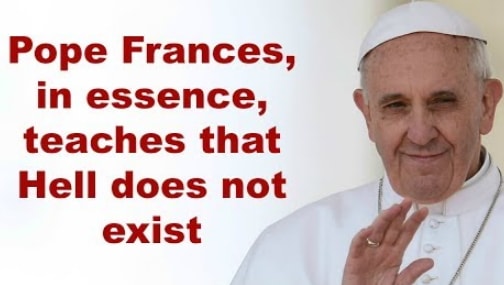 “Sinners Souls Will Disappear Into Eternity Because God Will Not Pardon Them” – Pope Francis Tells Atheist, Eugenio Scalfari

Many Catholic faithfuls who believe in the existence of hell are now worried as Pope Francis was today quoted saying “There is no hell where the souls of sinners suffer in eternity”.

The conflicting statement was made today in an interview with Italian tabloid La Repubblica.

In the interview translated to English, Francis said the souls of people who repent are pardoned by God after death while those who do not repent will disappear because they can’t be pardoned by God.

The interview was conducted by popular atheist and veteran journalist Eugenio Scalfari who enjoys unhindered access to the pope.