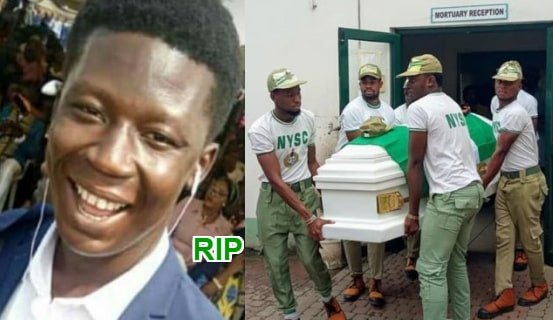 The Frightful End Of Precious Owolabi, A Brazen Incantation Of Bestiality Over Mankind

The untimely death of Precious Owolabi exposes, among other things, the relationship between government and the governed as a barbaric ritual drama where the performers periodically swap masks.

Owolabi’s demise, however, occurs jarringly in the drama; his corpse manifests as a sick rose wrapped in menacing public thorns.

The corps member serving with Channels TV, suffered a gunshot to the stomach as members of the Islamic Movement in Nigeria (IMN), otherwise known as Shiites, clashed with the police, on Monday, in Abuja.

At the backdrop of the mayhem, President Muhammadu Buhari’s Twitter reaction, that, he “most deeply commiserate with the families of Precious Owolabi” and another casualty of the crisis, “Deputy Commissioner of Police, Usman Umar, of the FCT Police Command” could be mistaken for artifice – a sterile rusing deception of a ruling class lamenting a pain it does not feel.

Does Buhari truly feel the pinch? How affected is he by the deaths? The IMN said 11 of its members were killed as they agitated for the release of their spiritual leader, El-Zakzaky, who was taken into custody by Buhari’s administration four years ago. Is Buhari regretful of Shiite deaths – whatever the true number of casualties?

Was his ‘twittered’ grief yet another maneuver mimicking compassion? What would Buhari say or do about the likes of Aisha Sani, the eight-year-old who was reportedly kidnapped two weeks ago from the Islamiyya School she attended with her siblings, in the Tudunwada quarters of Kano State by an unidentified lady?

Aisha’s kidnappers eventually demanded N200 million as ransom. Of course, the Sanis couldn’t afford it. Four days ago, Aisha’s corpse was found; she was hacked to death by her kidnappers. Her parents have since taken custody of her body for burial.

Cut to a recurrent panorama of mayhem and bloodshed from dusk through dawn across Borno, Zamfara, Benue, and the country’s major highways and transit towns, and you have a ghastly mosaic of the terror afflicting Nigeria.

The greatest terror, however, subsists in our complacent leadership, on whose watch, hundreds are hacked to death, monthly. In the wake of the carnage, public officers and politicians trade blames across party lines. While they play to the gallery, poor, helpless kidslike Aisha and youths like Owolabi, are murdered in cold blood.

President Buhari should flinch. He must understand that he is responsible for the safety of every Nigerian. He could, for instance, do with a more convincing response than silence to Aisha Sani’s murder and ‘twittered’ grief over Owolabi’s demise.

His expression of regret over Owolabi and Umar’s death is not enough. Regret is inadequate balm for eight-year-old Aisha Sani’s death and the carnage foisted on the country recurring conflict. The mayhem persists due to avoidable lapses in the security network and Nigeria’s culture of bigotries.

And, yes, the Shiite group overreaches itself by constituting a public nuisance but Buhari must learn to handle their grievances with tact, humility and wisdom characteristic of a mature leader. He must be decisive within the ambits of the law, and he must neither be condescending nor disdainful in his response to the debate triggered by the crisis.

Wild complacency, irrational brick bats, and mindless bloodshed have shaped our politics for too long. Many Nigerians, youth in particular, are probably living through the worst decade of their lives. They read of bloody genocides at dawn, poverty and strife in the next city while many more live through such. Add these to an economy patched with foreign loans and dubious tales of growth; if Nigeria is prospering, it hasn’t manifested in the lives of the citizenry.

It took a perfect assemblage of bad leadership to get to this moment. It would take an imperfect cannonball of a character to lead usthrough and survive it. Is Buhari such a man?

He was supposed to be a dependable President: a patriot of uncommon grit and fibre, whose fabled Spartan discipline, humaneness and decisiveness would signal the end of Nigeria’s recurrent carnage and locust years. Is he?

As the country endures, the youth would do right to coalesce into a cohesive force, given their significance to the country’s impending doom or probable rebirth.

The search should start now for individuals endowed with the native intelligence, skilled manpower, astounding genius, streetsmarts and wisdom, that Nigeria sorely needs to power her rebirth. The prospective candidates must be convincingly detribalised and courageous enough to eliminate crime and power Nigeria’s comatose industry.

Industry matters. If the youth are gainfully employed, they won’t be vulnerable to criminal masterminds using them to foment mayhem, for selfish ends.

In the Shiites-Police mayhem, for instance, none of the casualties was identified as a scion of the ruling class or rich, privileged divide. Its instructive to note too, that, no former or serving governor, president or legislator has a descendant among the murderous herdsmen and Boko Haram.

Such homicidal groups are mobilised from the working class, the boondocks and other destitute divide. It’s about time we put a stop to this.

Today is spitting out monsters, tomorrow portends the emergence of a million more ogres, if the cycle is not reversed.

What Nigeria needs at the moment is leadership driven by moral courage to change the status quo. While I wouldn’t root for a clueless gerontocracy or corrupt oligarchy, if Nigeria must elect a youthful leadership, it must comprise fully evolved, courageous, young men and women, capable of fostering change beneficial to all.

Moral courage encompasses the nerve to do the right thing and speak the truth always. It involves defying the mob as a solitary individual; spurning toxic comradeship and disobedience to a corrupt potentate, even at the risk of your life, for a higher principle.

Come 2023, Nigeria must root for a candidate identifiable as the window into the Nigerian psyche. The one who internalises the grief he has learnt from the streets. I speak of the candidate who shall manifest as the blank screen on which people of vastly different stripes can rally to project their dreams and needs; the passive yet active instrument by which Nigeria may prosper and attain rebirth.

Failure to do so would manifest as yet another sociopathic confusion; a sign of the internal political and social divisions that make it difficult for Nigeria to bloom by her youth in monolithic terms.

The youth is crucial to Nigeria’s rebirth; knowing this, the incumbent ruling class silences them by an irresistible material caress. Think political appointments, unearned benefits, tokenism, violent and intellectual thuggery for cash and so on.

The youth must understand their role in this cosmic mess and avoid future rehash of the present lest Nigeria becomes one big cautionary tale.