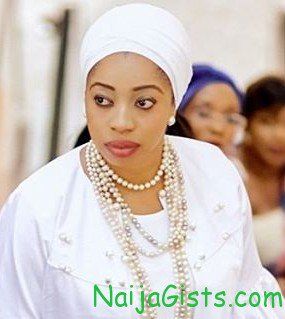 October 11, 2017 – The Queen Is Never To Be Blamed – A Beautiful Poem For Ooni Ex-wife Zaynab Otiti Obanor

This poem runs an unbiased commentary on the latest and unusual happening, being the first of it’s kind in the Yoruba culture, in the marital foray of the Ooni of Ife, Oba Ogunwusi and his ex-queen Zaynab Otiti Obanor.
As it carefully doesn’t heap the blame on either of the parties, it clearly delves into a deep analysis of the Yoruba culture, our personality struggles and how much they clash with the role of the gods in our affairs as humans.
For Her Highness, Zaynab Otiti Obanor

Ifa is a corpus,
the last gift Orunmila got from the Creator –
the divinity. the prophecy.
The gods are errand boys,
the bridge between the earth and beyond –
the crown is the deputy,
Alase Ekeji orisa –
the Oonirisa,
the powers that be.

The common man
and the royalty,
drank from a tap –
rooted from a source –
sprouted from an harem –
they both have footprints,
they both can run –
but not from their shadows..
what distinguish a man and the crown,
is the other realm –
the spirit world.

She is a woman –
she is magic herself –
for her bottom power speaks for her
and she is the common man –
who can lobby with the gods –
she stands in the quest,
of being a king
and being a natural genie.
But the Abobaku(s) are now scared of death,
no wonder a man fled into hiding some seasons back,
so he won’t swim beyond the earth with a king –
that was once a king.
She is the King’s wife
not Abobaku..
for even Abobaku o fe ku mo.

And
the poor cry fifty times a day,
the tears of the rich are unquantified..
what happens behind the closed door,
I don’t know –
you don’t know..
we know what they want us to know,
and like the gullible we were thought to be,
we believed the cock and bull stories..
what happens behind closed door,
is more than meet the eyes.
cries..shouts..screams.. fidgets..
that’s what comes with –
royalty.
tears. blood.
that’s what forms the water –
of royalty.
Royalty don’t just die,
they are killed –
for spirits don’t die,
we don’t call it suicide –
it is a pass over.

Some bear the mysteries that linger in royalty –
because of wealths. inheritance. status.
Some can’t just bear the mysteries –
for they might go blind.
And what law ordained that –
when a feet step out of the palace,
she can’t roam freely on the popular world ?
Even *akudaaya* roam freely.

Soldier goes,
soldier comes.
A soldier today,
a soldier forever.
But a soldier can dump his belt –
and pick a gauntlet.
She is out of the palace –
she is no more a spirit –
she is a woman..
she was always a woman,
for *ade isembaye* make a king,
and hence,she was not a queen –
but a choice wife.
The spiritual realm is built on choices –
not compulsion.
The gods don’t dictate,
they prophesy.
And Olodumare has total powers over prophecy..
for it to come to life or not,
just like He control a blossom –
to last for long or not.

Go to the earth and multiply !
was the command of Olodumare.
If this land is of no convenience,
then we can always sojourn to another land –
we are all common men,
until we see what we shouldn’t see.
And we can always be common again –
it’s from the heart,
not from the body.

Memory will have it –
as the queen who didn’t last for two years,
because she couldn’t endure –
the ghommids called royalty.
But –
there is always a second chance,
until death comes.
She is not to be blamed –
the gods are not to be blamed,
choice. choice. choice.
we always want to apportion blames –
we are still blind.

Some water have flowed for ages,
that dusts now make a nest out of it.
The chain would still continue,
as our heritage now turn to sham –
and the other world cackle at us..
the gods are laughing at our foolishness,
for no aspersion is to be casted on her –
she is never to be blamed.
She can once again,roam the free world..
liberty. choice. wisdom.
Yo yo yo,
Yoruba..
E ronu.

Balogun Alabi Yusuf, popularly known as Gemini by his moniker, is a novelist, playwright and a poet. He recently authored a pamphlet “Days Of Infirmity” in December, 2016 which happened to be his first book. He is the convener of a rising platform ARDENT WRITERS and is the chief editor of iTalkCulture organisation. His performances have been highlighted in Poets in FUNAAB 1.0,Breathing Words,Poetry Festival (SPED, OYO) among others. He’s currently working on his upcoming books,When a snake sheds its skin (a novel) and Smiling Carcass (a poetry book).

Continue Reading
You may also like...
Related Topics:ogunwusi, poem, wuraola