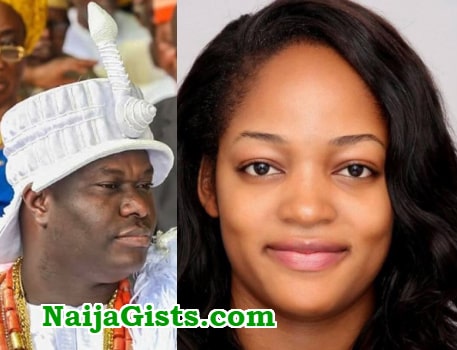 Evangelist Naomi Oluwaseyi was born on the 12th of October 1993 in Akure Ondo state Nigeria.

She gained admission into Adekunle Ajasin University years ago where she dropped out to yield to the calling of God.

On Wednesday the 17th of October 2018, she became the Queen of Ile Ife, Yeyeluwa Oodua.

Ooni of Ife New Wife: Is She the “Chosen One”?

The recent announcement of Ooni of Ife, which stated that he has found a new wife is currently trending on every media board in the country. The new bride in question, unlike her predecessors, is reportedly a born again Christian. However, just like her predecessors, she is also a stunning light-skinned beauty. Her name is Prophetess/Evangelist Morenike Naomi.

It is no longer news that Ooni of Ife, Oba Ogunwusi, has had two failed marriages. His most recent marriage, with Wuraola lasted only one year and a half. Today, amidst the fanfare and controversies surrounding the incoming queen, one big question remains: Is she the chosen one; the long-lasting queen of Ife kingdom? This question would be best answered by analyzing the previous marriages of Oba Ogunwusi vis-à-vis the personality of the incoming queen.

Follow this article with rapt attention as we attempt to provide answer to this big question.

The Ooni of Ife, His Imperial Majesty Oba Adeyeye Ogunwusi Akande, was born 44 years ago, on October 17, 1974. He was born into a royal family of Prince Aderopo and Princess Wuraola Ogunwusi. He had his basic education in Ibadan, before returning to Ile-Ife, to complete his secondary education at Saint Peters Secondary School. After obtaining his SSCE, he proceeded to The Polytechnic Ibadan, where he studied Accounting.

Oba Ogunwusi Adeyeye is, today, a professional chartered accountant and a revered entrepreneur. At a young age of 44, he is conveniently one of the youngest monarchs in Nigeria. He was crowned in 2015, when he was only 41 years old.

As a successful and highly powerful young man, the Ooni has always received admiration from women of all ages, tribes, shapes and of course, complexions. Over the course of his adulthood, he has been romantically involved with three known women, (the incoming queen would be the fourth).

Oba Ogunwusi’s first known romantic relationship dates back to the early 1990s, when he was still a teenager. At that time, he was romantically involved with a woman, whose name is Olatubosun Omolara. His affair with this woman gave him his only child (daughter). Omolara gave birth to their daughter, Princess Adeola Ogunwusi, in May, 1994. Their relationship, however, wouldn’t go beyond being co-parents to their daughter and that has remained the same ever since.

In 2008, Oba Ogunwusi Enitan took the bold step, when he decided it was time to settle down. He got married to his first wife, Adebukunola Bombata. Their marriage was all rosy, with one obvious blemish; it didn’t produce any child. Ooni officially divorced Bukunola shortly after his coronation in October 2016.

The exit of Adebukunola ushered in Zainab Wuraola Otiti, who is an irresistible light-skinned beauty. Wuraola was subsequently crowned the queen; Her Majesty, the Olori of Ife empire. Their marriage was described as an ordainment of the gods. The king and his queen were conferred with a god and goddess status. They became the cynosure of all eyes everywhere they go. One striking thing about Olori Wuraola was that, she’s renown for her glamorous lifestyle, an attribute many described as unfit for a queen of her status.

About one and half year into their royal marriage, tragedy struck; the couple broke up and went their separate ways. What really transpired, which resulted in their untimely royal-divorce remains a mystery. Oba Ogunwusi chose to bid his time after the divorce, so as not to make the same mistake twice; by rushing into another marriage, as he did after his previous divorce.

It took him over one year to find the woman he desires, in person of the incoming queen, Prophetess Naomi Morenike. They say once beaten, twice shy; Ooni would not want to make a bad choice for the second consecutive time.

What We Know About Ooni of Ife’s New Bride

Earlier today, Friday, October 19, 2018, the Ooni announced to the whole world that he has found a new bride. This was contained in the statement posted on his official social media pages. The wedding ceremony is expected to take place this weekend.

The new bride, whose full name is Shilekunola Oluwaseyi Naomi Morenike, is a 25 years old Evangelist. She started ministering about seven years ago, when she was just 18 years old. She is the founder of a church known as En-Heralds, a church ministry based in Akure, Ondo state.

While Prophetess Naomi shares similar characteristics with her predecessors in terms of appearance, her spirituality (Christian belief) is obviously stronger. It was gathered that, the new queen dropped out of the University (AAUA), because she supposedly had a “call to ministry” from God. She subsequently went on to set up her own ministry, whose congregation has grown significantly over the years.

Controversies have trailed Ooni’s announcement of his new bride, who is a devout Christian. The controversies centre around the religious compatibility of the couple. While the Ooni is a renown traditionist, as required of his throne, Morenike is a Prophetess who promotes Christianity. In summary, religiously, Oba Ogunwusi and Prophetess Morenike are like the opposing sides of a coin.

It is a known fact that, Christianity forbids such association. Hence, the incoming queen has been condemned in some quarters for being a religious hypocrite, who abandons God for power and wealth. Her condemnation gained steam when pictures surfaced online, which showed the ‘Prophetess’ going through certain traditional rituals at the Ooni’s palace in Ile-Ife. Although, we might not know the whole story, such acts are unbefitting of a Christian spiritual leader.

Will the Marriage Last?

Ooni of Ife, just like his ex-wives, is known for a glittering lifestyle. In fact, one could easily mistake him for an entertainer. In his last marriage, he opted for a renown socialite, Wuraola. However, this time around he has opted for a homegrown lady, who would instill some level of tranquility in his life.

Barring the conflicts of interests, occasioned by their religious differences, Oba Ogunwusi Enitan and Prophetess Morenike could very well be a match made from heaven. However, the prefixes and titles before their respective names appear to be the only blemish in an otherwise flawless compatibility.

However, it is not all doom, as the Ooni has always maintained his stance of being a practising Christian. Although, the requirements and duties of his throne suggest otherwise. In Prophetess Naomi’s mind, it could be a case of “marry the man and not the throne”.

In conclusion, it appears, from all indications, that the only problem Oba Ogunwusi and Prophetess Morenike’s marriage could face would enamate from their opposing religious convictions. If they could, some how, bridge the gap in this regard, Prophetess Naomi Morenike could be the ‘chosen’ queen, who would live a long-lasting life with her king.

We wish the Ooni and his new bride the best of marital bliss!!.