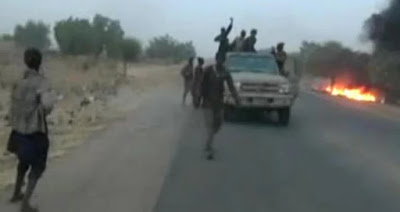 2 of the girls abducted by Boko Haram at the Government Girls Science Technical College (GGSTC) Dapchi, Yobe State, on Monday have been reported dead in a failed rescue operation.

Their bodies were recovered on Wednesday by the Nigerian military.

This is even as the Federal Government yesterday confirmed the abduction, admitting that many of the schoolgirls were yet to be found.

Also yesterday, Governor Ibrahim Gaidam said none of the students in captivity of Boko Haram insurgents were rescued.

According to agency report two of the girls were killed while some others were still missing.

The report said a resident and a local government official said there was jubilation in Dapchi community over the rescue of some of the girls.

“Everybody is celebrating their coming with songs and praises to God Almighty,” said Babagana Umar, one of the parents whose daughter had disappeared.

“The only sad news is that two girls were dead without explanation.”

Minister of Information, Alhaji Lai Mohammed, who led the Federal Government delegation to Dapchi headquarters of Bursari Local Government, declared that some of the girls were still missing and unaccounted for.

“What we know as at today (Thursday) is that some of the girls are still unaccounted for. That is because some of them are still trickling back to the school,” he said without giving details of the number of girls rescued or seen.

He said the responses from the military and Yobe State government was commendable:

“Since this thing happened, I have been in touch with the governor, the theatre commander and the GOC (General Officer Commanding).”

He said Boko Haram was looking for oxygen to breath having been pushed out of Sambisa and other fringes. Mohammed was accompanied by the Minister of State for Foreign Affairs, Hajiya Khadija Abba Ibrahim and a representative of the Minister of Defense. And speaking when he visited community yesterday, Gaidam told family members of the students to keep praying that the girls should be found.

The state government, however, regretted that it issued the statement, claiming some of the girls were rescued based on the “information provided by one of the security agencies involved in the fight against Boko Haram,” which it had no reason to doubt.