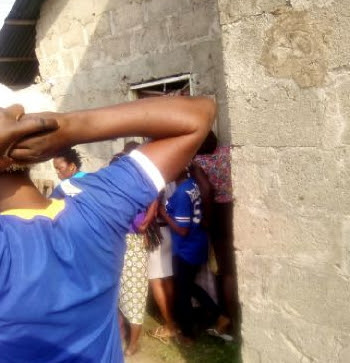 A man and his entire family have been wiped out by some suspected ritual killers who attacked them in the early hours of yesterday, Tuesday the 11th of April 2017.

The family man identified as Lucky Ebhodaghe from Edo state was killed alongside his wife and son by the suspected ritualists at their home in Ibeshe area of Ikorodu.

According to police investigation, the suspects removed the glass window and the protector and tore the net before sneaking into the newly built house.

They reportedly raped the woman before smashing the victims heads with big stones.

The bodies of the victims found in the pool of blood were deposited at Ikorodu General Hospital mortuary.

Neighbours said Lucky Ebhodaghe relocated into his new house from his rented self contained apartment in Ajegunle about 3 months ago only to be murdered in cold blood.

May his soul and that of his family members rest in peace.