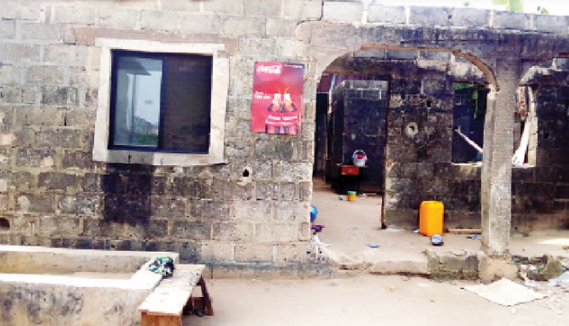 Above is the house where two children were killed on Christmas day.

Some suspected ritualists who have been terrorizing residents of Ibeshe area of Ikorodu in the past 4 months stormed the family of the Oriades on Saka Adegbose street in Ikorodu on Sunday the 25th of December 2016.

Two children sleeping in the living room were killed by the ritual killers who entered the building by breaking the net on one of the windows.

They reportedly hit the children with some objects.

The first child of the family 21-year-old Azeezat Oriade died on the spot while her brother Abeed Oriade died at the Ikorodu General hospital.  Two other children injured in the attack are currently clinging to life at the hospital.

One of the house owners in the area, Wale Oladunjoye said the heartbroken parents had been relocated by their relatives.