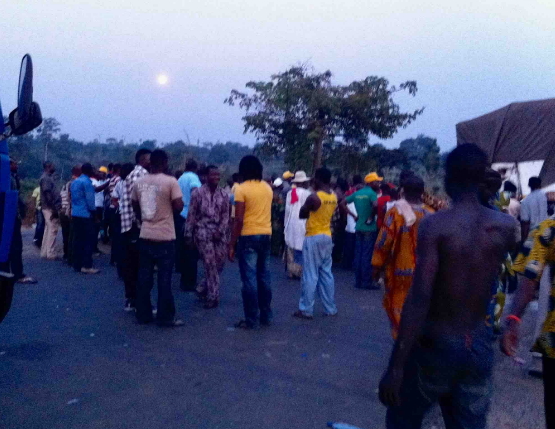 Some suspected kidnappers struck again in Rivers State on Thursday, waylaying an 18-seater bus and abducting the 19 occupants of the vehicle, including the driver.

It was gathered that the incident happened on Isiokpo-Elele Road in the Ikwerre Local Government Area, about 30 kilometres from Agip Junction in Port Harcourt, where the bus branded, Rivers Mass Transit Company, took off.

Sources explained that the kidnappers, who were 10 in number and heavily armed, blocked the road and forced the bus to stop as soon as it (bus) approached them.

Thursday’s abduction would be the third time in one month that passengers would be waylaid on the road by hoodlums.

It was also learnt that the victims, who were on their way to Owerri, the Imo State capital, were marched into the bush by their captors at about 8.30am.

A driver plying the route, Mr. Martins Aluziwe, said his bus was earlier attacked by the hoodlums, adding that he and the driver, whose bus was intercepted, loaded passengers into their vehicles almost at the same time at Agip and Whimpy junctions before moving out of the park at the same time.

Aluziwe added that soldiers at a checkpoint close to the scene of the incident had moved into the bush to ensure the rescue of the abducted persons.

He said, “What happened was that we were going to Owerri this morning (Thursday). On getting to Omuagwa, I met the driver of the hijacked vehicle, who was also travelling to Owerri. When we got to the bridge by Isiokpo Junction, armed men attacked us.

“Because I was in the front, they only shot at my car; they could not stop me. The bullet did not hit anybody inside my vehicle, but the other bus was attacked and everybody, including the driver, were taken into the bush.

“Another driver informed me that soldiers had entered into the bush, but no information about the kidnapped victims yet. We are calling for more security personnel to rescue the people.”

He said 12 persons among the kidnap victims had been rescued.

He said, “It happened this morning (Thursady). Our men have rescued 12 persons. Efforts are on to get others rescued.”

Omoni explained that security operatives were still combing the bush with a view to apprehending the hoodlums and rescuing the remaining passengers.