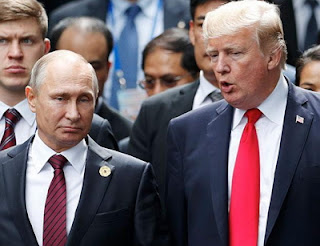 In a retaliatory movie against US action over a spy poisoning case in the United Kingdom, Russia has expelled 60 United States diplomats and closed the country’s St Petersburg consulate .

The tough moves announced by Russian Foreign affairs minister, Sergei Lavrow comes amid a row over the nerve agent attack on a former Russian spy and his daughter in southern England.

Sergei Skripal and his daughter Yulia were found unconscious on a bench in the city of Salisbury on March 4.

More than 20 countries have expelled Russian envoys, in solidarity with the UK, which blamed Moscow for the attack.

Russia has vehemently denied any involvement in the incident.

Mr. Skripal remains in a critical but stable condition.

His daughter’s condition is said to be improving.

Mr. Lavrov said the U.S ambassador had been informed of the “retaliatory measures.”

Continue Reading
You may also like...
Related Topics:close, embassy, expel, russia, us diplomats