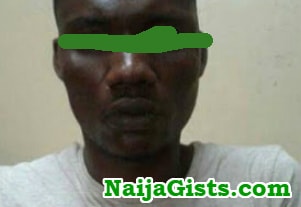 The Lagos High Court sitting in Ikeja on Wednesday sentenced a driver and disgruntled former employee, Monsuru Ayoola, to death for armed robbery.

Justice Raliat Adebiyi convicted Ayoola on a one count charge of armed robbery.

The judge found him guilty of robbing his former employer, Mr. Lanre Alabi, in 2015, with a toy gun and machete for allegedly owing him salary.

“The defendant is found guilty on a one count charge of armed robbery.

“The punishment for the offence is a strict and a mandatory one and for this reason, the allocutus of the defence counsel cannot apply.

“The defendant is hereby sentenced to death pursuant to Section 295 of the Criminal Law of Lagos, 2011.

“May God have mercy on your soul.”

She, however, discharged Ayoola on a two-count charge of armed robbery and inflicting injury for insufficient evidence.

“Oluwasegun Badia, the alleged second victim was not produced in court and no evidence about the alleged armed robbery was given in court.

“On count three which is the charge of inflicting injury, the court finds that the prosecution was unable to produce in court, proof of the injury as well as the alleged victim (Badia).”

Earlier, Ayoola’s counsel, Mrs. O. Oreagba-Ademola, made an allocutus pleading with the court to temper justice with mercy.

“We urge Your Lordship to temper justice with mercy. He is a first time offender and has no prior criminal record,” the defence counsel said.

Ayoola, of No. 153, Adeniyi Adeniji Street, Lagos Island, was arraigned by Lagos State Government on March 14, 2016.

He pleaded not guilty to a three-count charge of armed robbery and inflicting injury.

“While wearing a plastic mask to conceal his identity, and armed with a machete and toy gun, he robbed Alabi, his former employer of his black wallet containing N50,000 and his Nokia and HTC mobile phones.

“He also robbed Mr. Oluwaseun Badia of N18,000 and a Nokia mobile phone and stabbed Badia while fleeing the crime scene.

According to the prosecution, Ayoola was apprehended by security guards and was unmasked during the ensuing struggle.

He issued death threats to the guards who immediately recognised him.