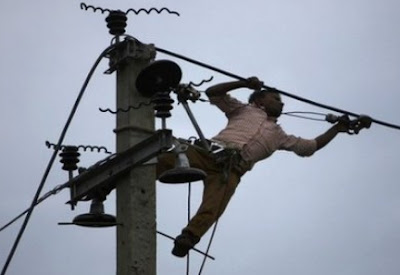 A former employee of defunct Power Holding Company (PHCN) has been electrocuted in Agbor, Ika South L.G.A. in Delta State after power was restored to the high tension lines he was illegally working on.

The victim who was identified as Monday Eboh, hails from Idumu Esah in Ika North East Local Government Area, was electrocuted on a high tension cable after power was turned on by Benin Electricity Distribution Company (BEDC).

We gathered that the victim lost his job and has been working privately as an electrician.

An eye witness who spoke on condition of anonymity said, “Monday was a former NEPA staff before he lost his job there, so he started working as an electrician. An electrician informed Monday of a job work, but he said he was on his way. After some time, a lady called back informing us that Monday was dead that Monday was on the high tension electric when BEDC restored power. So we rushed down to Owanta close to the second power line and met Monday dead then we rushed him to the mortuary”.

Corporate Affairs Officer, BEDC, Asaba/Agbor, Mrs. Esther Okolie said the victim had been declared wanted by the security operatives for his illegal activities which has destroyed BEDC installations and transformers

According to her the victim who was a staff of the organization was dismissed in 2009.

Mrs. Okolie said that the victim was trying to illegally divert lines from one feeder to another unknown that power would be restored.

“The electrocuted suspect has been declared wanted by the security operatives i.e. the police, SSS and by the Business Manager of BEDC Agbor for wanton destruction of our installations and transformers through his illegal activities last year. Monday Ebor who was an ex-staff but dismissed in 2009 was electrocuted at Jolly Street Ist Power-Line,Boji-Boji Owa while trying to illegally divert lines from Owa Feeder to another in Town Feeder unknown to him that the Feeder that was out on load would be restored by noon”.