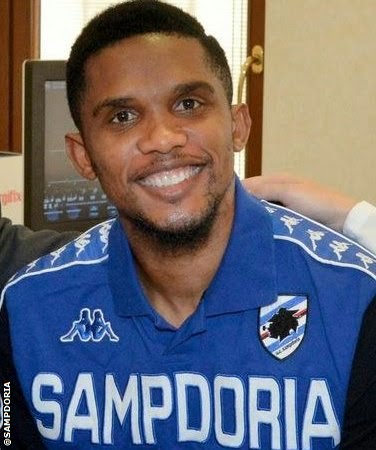 March 13, 2015 – Samuel Etoo Narrates How A Black Racist Sales Woman In London Mistaken Him For A Nigerian Fraudster

The footballer working tirelessly to rid football of racism said a sales woman working at a London jewelry store refused to sell him a $15,000 gold watch after she mistaken him for a Nigerian fraudster.

“I asked the saleswoman — who was also black like me — ‘Could you show me that watch please?’

“First, I saw her turn and look at her coworkers like, ‘Uh, what should I do?’

“I took out my credit card and when she went to go run it through the machine, she came back and said that it was declined.

“I asked her, ‘Was it declined or did you not want it to be accepted?’ because this has happened to me many times and she told me, ‘No, it was declined.'”

Eto’o, who played in London with Chelsea last season, called his brother who was nearby and it was he who brought a new credit card so the transaction could be completed.

While Eto’o does speak English, his brother has a far wider vocabulary and was able to ask just what had occurred moments earlier.

“My brother can afford this and the way you’re treating him shows that you think just because he’s black, he can’t afford this watch,” said the sibling.

Eto’o then takes up the story, saying the lady in the store said she was wary of him because:

“we had some Nigerians in the store the other day who came with fake credit cards.”

“The security guard from Senegal kept trying to justify what the lady said and I asked him where he’s from. When he told me, I said, ‘Ahh. If I gave you my name, you will recognize who I am?’

“He shrugged and I said, ‘I’m Eto’o.’ He went, ‘Nooooo! Just yesterday, my wife and I were talking about you! Can I take a picture with you and send it to my wife?’

“I said, ‘Yes, we can take a picture, but you made a mistake because you can’t judge people by the color of their skin,’ so he told me it wasn’t because of our color.

“I told the lady, ‘In my next interview, I’m going to tell them about this and I’ll name the store so everyone can know that you treat people differently here,’ added Eto’o referring to the saleswoman.

“She then realized that I could have reported what she had just done, but it was a mistake. It was a mistake of her to categorize. I don’t think she’s a racist person, but she stereotyped all black people as ‘those people’.”