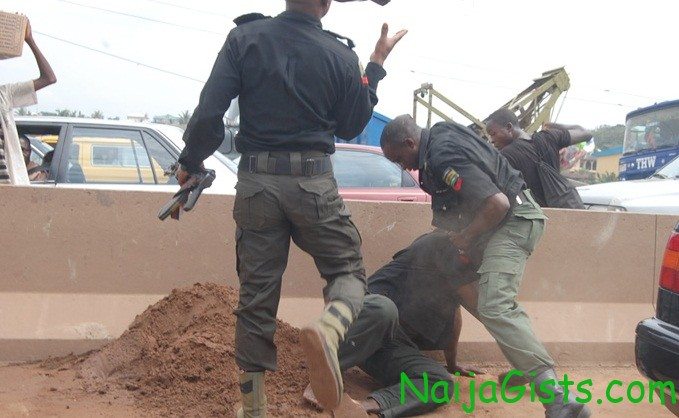 This gross misconduct took place at Eleme roundabout in Port Harcourt on Thursday May 10th, 2012. naijagists.com

The Six Nigerian Policemen beat their fellow colleague to pulp for preventing them to collect bribe from a commercial bus driver.

According to eye witnesses the name of the Mobile Policeman who was beaten to coma as James Ameh and attached to Mopol 56.

They said he was in a commercial bus when suddenly about six Policemen stopped the vehicle, ordering the driver to hand over the key to them. They said he had flouted traffic rule at about 7pm when he picked a passenger in the area.

The driver who did not want to waste time allegedly alighted from his vehicle to negotiate with the Policemen who insisted he must part with five thousand naira.  At this point, the Mobile Policeman,  James Ameh who was reportedly on the front seat with the Bus driver had to come down to appeal to his colleagues to let the driver go for his sake.

The Policemen were allegedly uncomfortable with his role in the whole drama. And one of them had to push him, telling him to get off their way.  Before the Mobile Policeman could even regain balance, the six Policemen reportedly started raining slaps at him from all sides. In the heat of the ugly drama, the anti riot policeman allegedly slumped.

The eyewitnesses said it took the intervention of sympathisers to move him from where he allegedly slumped.

When contacted for comment on the alleged shameful conduct of some Policemen in his command, the state Police Commissioner, Mr Mohamed Indabawa said those allegedly involved were being investigated.

He said the matter had been brought to his attention. “We know those said to be involved. And the whole issue is being investigated”, he said.

This nonsense happens everyday in Nigeria.