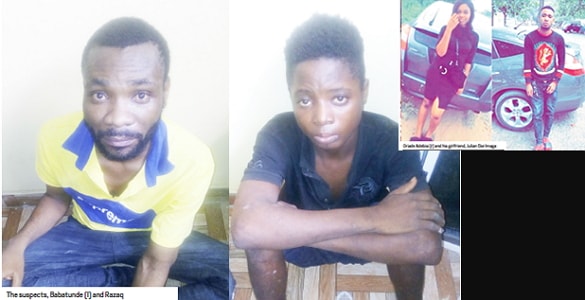 26-year-old Murtala Babatunde, and 18-year-old Taiwo Razaq, have confessed that they killed Adebisi Oriade, 22, and his girlfriend, Juliana Eke Imaga, both students of Olabisi Onabanjo University, Ago Iwoye, Ogun State with a plank when several attempts to use their gun failed to work.

Babatunde and Razaq have been arrested by operatives of the IGP-Intelligence Response Team (IRT), led by DCP Abba Kyari, in collaboration with Oyo State Federal Special Anti-Robbery Squad (FSARS) and Ogun State Police Command in connection with the brutal murders, said they abducted the victims from their friend’s house and took them to uncompleted building around Oru-Ijebu Junction along the Benin-Shagamu Expressway on Thursday, May 28.

Speaking with journalists in Lagos on Wednesday, Babatunde said that he and his gang members killed Adebisi over his failure to “settle” him on one of their business deals with his foreign client.

Babatunde said that his client from the US state of Texas, paid money into Adebisi’s foreign account, but he failed to give him, his own share.

Narrating his story, Babatunde noted that Adebisi was his god son.

“We are very good friends and he always came to around whenever he needs something from me. We also lived in the same area, play ball together and watch foreign football leagues in the same viewing centre.

What actually happened between two of us was that sometime in March this year, he gave me his bank account tnumber to enable me collect money from my foreign client.

“I don’t have such a bank account because I became a yahoo guy after my birthday last year October. From there, we moved from one stage to another and later became partners.

In our last dealing, my client paid money into his account and he refused to settle me.

“I have been disturbing him to pay me and he was playing me. Whenever, I met Adebisi on the way by chance, he would tell me to send my bank account to him, that he would credit my account. On several occasions, he had requested for my bank account. One day, I called him that I needed money badly, and he told me that some boys broke into his house in Lagos and took away his gold, money and other valuable things. That I should still calm down.

“Another time, I met him at a filling station at Ijebu Ode and he still said that I should send my account number. He will send some money to me when he got home. “Since we became friends, I have not benefited anything from him. He was spending money anyhow without settling me from the business dealings we did together. It was obvious that he was spending my money. Around April, I began to receive threat messages and calls from Adebisi’s cult members, Alora Confraternity that they would deal with me if I am not careful.

“On May 27, I went to my girlfriend’s place; I saw his car in one of his friend’s house. I told my girlfriend (name withheld) to keep watching the car for me, until the following day and on May 28, around 9/10 pm, my girlfriend called me that his car is there again, meaning that Adebisi was around.

“I invited two of my own gang members, Razaq and Sodiq, and we took a motorcycle to where Adebisi’s car was parked. Before then I had taken a bag containing two locally made guns and one cutlass to my girlfriend’s house. One of the guns was given to me, when I was promoted as the leader of our cult group, Aiye Confraternity in the area and the other one, belonged to Razaq. “On the day we killed them, we waited somewhere close to his car until around 11 pm when Adebisi and his girlfriend (name withheld) came out from their friend’s house.

I approached them and brought out my gun and ordered them to enter the vehicle and sit on the back seat. “Before, he entered, he called me, ‘egbon’ (which is ‘elder brother’ in Yoruba), and told me that the money to settle me was not yet available but that very soon, he would settle me. I told him not to worry, that I was not asking him about the money but that his gang members had been threatening me.

And that I was angry that he could report to his cult members when I was just asking him for my share of the business we did together.” Babatunde then said he told Razaq and Sodiq that they should leave the area and drove his (Adebisi’s) car to an uncompleted building along Oru-Ijebu Junction where they killed both of them.

“We tried to shot them with our guns but the bullet didn’t come out. That’s why we used a plank to hit them repeatedly until they died. “However, before then when Adebisi realised that we wanted to kill him, he begged me to spare his life and take his vehicle. I told him, ‘sorry, I don’t need his car or anything from him’.

But after we killed them I took his apple laptop, two pair of shoes, and his cell-phones. I took his shoes because I wanted to wear them. “Although he gave me his bank account information before he died, I transferred N50, 000 from his account into mine. I also recharged N5000 into my mobile phone from his account,” he said.

On why they also killed Adebisi’s three-month pregnant girlfriend, Babatunde said: “Imaga (Adebisi’s girlfriend) don’t have any problems with us but we didn’t want her to expose us for killing her boyfriend. I told Razaq and Sodiq, if not that raping is an abomination in our Confraternity, I would have raped her before killing her.”

Babatunde said that he took Imaga away from where his group was pummelling Adebisi to death and then later brought her back to be killed. Speaking further the murder suspect said: “We left their dead bodies in the uncompleted building and drove their vehicle to a nearby police station around the place. After the incident, I went back to Ibadan, Oyo State, where I’m based. I’m a driver.

On his attempt to escape from police custody, Babatunde explained: “I was brought out from the cell to the counter in the Ibadan SARS Police Station. My investigation officer was talking to another officer, when I took his key and unlocked my handcuffs.

I ran out from the station but I was caught at the gate. I want to avoid the law because I knew I will be punished for what I did. I am regretting everything I have done.” Razaq, who hails from Imota, Ikorodu in Lagos State, said he was in a hotel when Babatunde came to him, that there was a job, he want him to do.

Razaq, a welder apprentice, insisted that he had never killed anybody before Adebisi and his girlfriend.

“When Adebisi was begging me and Sodiq not to kill him, Babatunde told us that, he (Adebisi) will report us to the police because of the guns he saw with us. I didn’t want him to report us to the police and that’s why we killed him with a plank when our guns failed to work. Later Babatunde gave me and Sodiq, N30, 000 and we shared it N15, 000 each. I am pleading for mercy and I will turn a new leaf.”