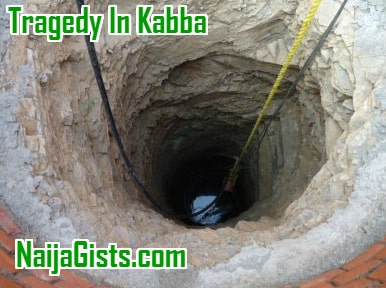 Siblings & 2 Others Drown While Digging Well In Kabba Kogi State

The quartet whose names were given as David, Sunday, Ayo and Ogbekedo with two of them from the same parents, it was gathered specialize in digging wells.

Unconfirmed source had it that they fell into the well and died, after the finish of work.

An eyewitness said that the tragedy occurred at Zango quarters in Kabba, where a primary schoolmistress, whose name was given as Mrs Agnes Baiyere, had contracted them to dig the well in the front of her newly constructed four-bedroom apartment.

The woman, a teacher in St. Mary’s Primary School, Kabba was said to have contracted one of them, David, who invited the others to join him in digging the well.

Work was said to have been completed, when two of them returned Monday evening, to evacuate some broken blocks that fell into the well.

However, when one of them entered into the well, he was said to have complained of dizziness, following which another came to his aid.

The two were said to have been trapped in the well and could not come out.

As the news filtered round, the two other workers who were said to have made for the site to rescue their colleagues, were also trapped and could not come out.

Personnel of the Abuja Electricity Distribution Company (AEDC), Kabba, office, who were said to have been contacted, raced to the scene with their ladder, with which the remains of the four were evacuated.

It was gathered that one of the deceased, David, just got married, after completing his mandatory one-year NYSC national assignment, last year.

The remains of the deceased whose ages ranged from between 30 and 35 years, have been deposited at the morgue of the General Hospital Kabba, for possible autopsy.