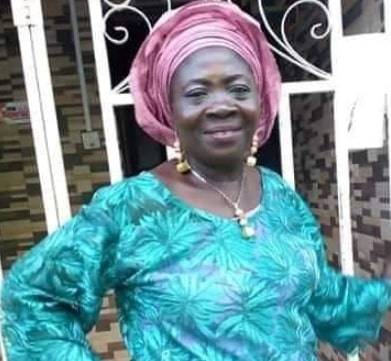 The widower of Salome Abuh, the PDP women leader burnt to death in her own in Ofu LGA of Kogi state last Monday,the 18th of November 2019 is now calling for justice.

Mr Simeon Abuh demands for justice in this interview with Success Nwogu as he recounts what his wife went through in the hands of some political thugs who killed her.

See excerpt of the interview below.

How have you been coping since the gruesome murder of your wife on Monday?

It has been very painful, traumatic, and devastating. Good friends around me have been coming to encourage me. My children and other family members are all with me. I am looking up to God for his mercy.

How has it affected your children?

Well, it has been very painful. We are down because our light has been put out. This woman was the light of the family. She was our pride. She was a goal-getter and a peace-loving person. She was a devout Christian who loved nothing but peace.

We have four children – three girls and one boy. They are all grown. The youngest is 26 years old and the eldest is 36. They are graduates but three of them are looking for jobs so only one of them is working. They are all devastated by this sad occurrence. It has been a painful situation for them. They could not imagine it.

Where were you when the sad incident took place?

I was not there but was given the sad news on the phone. I was in Abuja. My younger brother called me from Lokoja, saying there was trouble at home. On the day of the election, some people accosted me and said they would deal with my younger brother, Gowon. I told them that there was no need to deal with anybody. They told me that they were in the good books of GYB 4+4 (Governor Yahaya Bello) and that nothing would make him lose the governorship election. One of them told me that whatever they wanted to do, they would do it.

At that time, I told them that there was no need for any rancour as we are all from the same community. We should remain peaceful people.

We voted at Ochada Primary School and I left. I told my wife to stay behind because as a party chieftain, she had to know what was happening. Not quite long after I left, one of those who accosted me started to beat my wife and my younger brother (Gowon), who was there, intervened. In the process, the man and his team attempted to stab my brother so he ran for his dear life.

Later, my wife was brought to me at home on a motorcycle and I was advised to take her to Dr Ochadamu Memorial Hospital as she had been beaten up. I took her there and she was treated by Dr Agama. I was advised to get some rest. So that Saturday evening, I went to Abuja. On Monday, my wife was resting at home, not knowing her life was in danger. The same people who beat her up and attempted to stab my brother, came to a bar close to our house and boasted that they were not able to get my younger brother on Saturday but that he would not survive Monday.

My younger brother’s son, Solomon, heard what they were saying and went to plead with them. He told them to forgive his father but one of them picked up a bottle and said he would break his head before he killed his father (Gowon). Solomon had to run for his dear life. The guy ran after him and unfortunately for him, he fell on a knife that was in his pocket. He fell on his own weapon and it cut him in his lap. He started bleeding and was taken to Dr Ochadamu Memorial Hospital for treatment.

He was asked to get a police report but they could not get it. He was taken to another hospital but he died while receiving treatment. The next thing was for people to start burning houses. Four houses were burnt down in my compound in Ochadamu and my wife was burnt alive. She was trying to run away and did not know what was happening. Gunmen started shooting and people had to run away. My wife, who was not feeling well, could not come out of the house because those people pushed her back. That is the account of the incident. Nobody was stabbed. The person that wanted to stab my brother fell on his own knife and bled to death. Only my wife and that man died.

How long were you married to your wife before she was gruesomely murdered?

How did you react when you were informed of her death?

Why are you not sure you will be allowed to bury her in peace?

As things are, I would not say that I am sure of a safe environment. That is why I am also calling on the international community, the government and everybody, including my community to ensure that this burial is done successfully.

But there is information that she was burnt to ashes. How do you plan to do the burial?

Yes. They told me that she was burnt to ashes. The police and people in the community have put her remains in the mortuary at Anyingba. 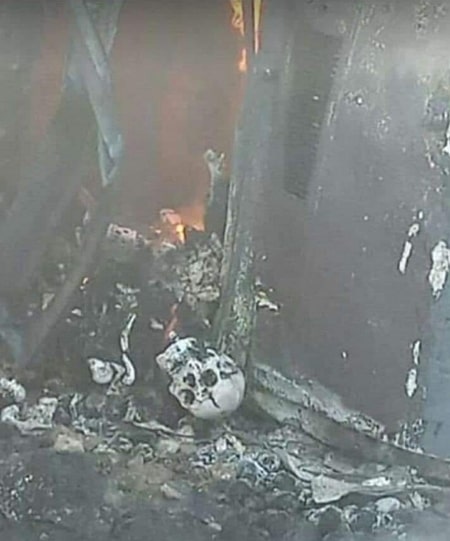 The gory scene of the attack

What about you? Has it been difficult to sleep or do anything?

How can I sleep? If I close my eyes, I think of my wife. Each time I close my eyes to sleep, it dawns on me that my light has been put out. I ask whether I can get justice from the Nigerian government. I have been having sleepless nights since the incident occurred.

I have not been able to do anything. What can I do? My church is making arrangements for the burial. I want to bury my wife in peace and give her the last respect she deserves. She was a peaceful person and a committed Christian. She was a mother and a grandmother. She clocked 60 years on November 17 and was killed on November 18. The last time I saw her alive was on Saturday, November 16, after we left the hospital. We held each other and prayed before I left (for Abuja).

When I got information that those guys were moving towards our house, I called to inform my wife and she said, ‘Okay, I am going out now. Let me rush out now.’ Those were the last words she said to me. I called her five minutes, 10 minutes and 20 minutes later, nobody picked up the phone.

I was told that she was on her way out before the guys came, shot her and set her ablaze. Anybody that says they didn’t know there was someone in the house is lying. At her age, there was no way she could have overpowered the irate young men. My wife was burnt alive. It was not a mistake.

Do you think the police are doing enough to find the killers?

Your guess is as good as mine. Do we have justice in Nigeria?

If you had the power to mete out punishment to the killers, what would you wish should happen to them?

As a human being, as a Christian, as a community leader, I see all of them as my children. That is the reason why I said, ‘Put anger aside so that we can discuss as a family.’ Even if all of them are killed, will that bring my wife back? Will my life move on again? All I can ask is for God to give me justice.

Are you disappointed that security agents could not come to the aid of your wife all through the time it lasted?

Yes, I am. Even during the election, where were the policemen? Where were they when there was violence at the polling booth? I am disappointed!

You wife was a chieftain of the Peoples Democratic Party, have political parties, including her party contacted you?

Yes, the governorship candidate, Mr Musa Wada, and his wife have been consistently visiting and consoling us. Another chieftain, a former Governor of Kogi State, Capt Idris Wada (retd.), has visited the family. They have been encouraging us and others have been coming too.

What were her dreams in life and things she hoped to achieve?

She wanted peace and development in Igalaland. She was a woman of the people. Nigeria women should take a stand and declare war against this injustice. Women should speak with one voice. Let it be known to women that my wife died to liberate women for the cause of humanity. She did not die a natural death; she was burnt alive. Women should make sure that the perpetrators are brought to justice and that the government of Nigeria is put on its toes. The international community, civil society and the world should know what has happened to us.

You said she died a day after her birthday. Did she have plans to celebrate it in a big way?

I will be 60 years old by April 2020 and we agreed to celebrate our birthdays together next year. Our hopes were high for it.

How is her maiden family coping with her death?

Oh! It has been pain, agony, disappointment and loss of hope. Her mother is still alive. And being the shining light and star of the family and the community, her mother is devastated. Her mother is between 85 and 90 years old. Her siblings are confused; they have yet to come to terms with the reality.

What do you want now considering what happened to you?

I am asking for justice. I am a retired civil servant. I retired after 35 years of service. I worked for the Federal Government of Nigeria. I was a pool officer; we were moved from ministry to ministry. We had no particular ministry but we were attached to the Office of the Head of Service of the Federation. My wife also retired and joined politics. She was working with Ofu Local Government in Kogi State and she was a Councillor in the local government at a time. She contested several political positions, including for seats in the House of Assembly and House of Representatives before now.