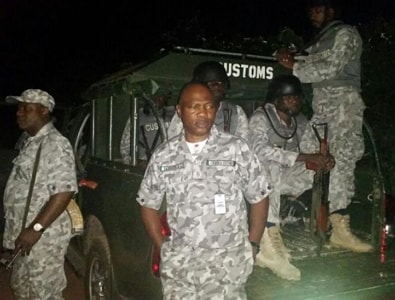 A mild drama played out along Katsina -Jibia road as Police officers attached to the convoy of the Vice President, Professor Yemi Osinbanjo attacked and beat up three customs officials on border checking point at Daddara village, Katsina state.

The incident occurred at the village, when the vice president who was in the area on behalf of President Buhari to condole with victims of recent flood disaster in the area was returning to Katsina after the visit.

Trouble started when the customs officials had apprehended a vehicle with which a group of youths had allegedly smuggled contraband goods from neighboring Niger Republic.

It was while the customs officials were struggling to impound the vehicle belonging to the suspected smugglers that the vice president’s convoy passed by the village while on its way to the metropolitan area.

An eyewitness said the customs officials were threateningly brandishing their rifles to ward off several youths who stormed to the scene in show of sympathy to the smugglers.

According to him, the police in the convoy of the vice president, on seeing what the customs officials were doing with their weapons, perceived it as a security threat.

He said “Several policemen immediately came down from their vehicles and descended on the customs officials. One of them even fired a shot into the air’’.

He said that the suspected smugglers however used the opportunity of the commotion to tow their vehicle away.

“Some of the youths that had gathered threw stones at the customs officials’ vehicle and continued to boo them till they left the area.”