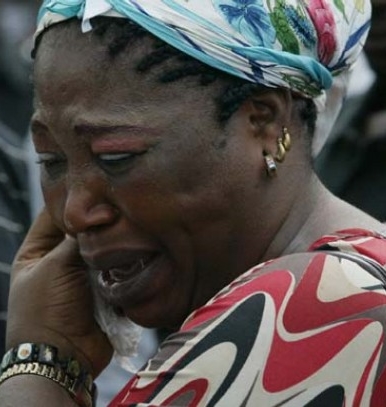 She lost her husband and father when the building at 29b Oloto Street, Ebute-Metta, Lagos collapsed few day ago. She had resided there for the past two years.

The ill-fated three-storey building, constructed about ten years ago, reportedly developed cracks all over and was being repaired annually before the collapse. On that fateful Thursday, the occupants of the building were asleep when a loud bang was heard around 1.30am. Immediately, some of them rushed outside but others could not until the building caved in; in the process, some people lost their lives while others sustained injuries.

As soon as the news of the incident was broken, the landlord, identified as Alhaji Oladimeji Gbaja, who lived next door, escaped.

Narrating her story;
Fatimo and her husband were able to escape the incident but they forgot her aged father on the bed. Soon after they got out, they remembered her father and her husband rushed back to the room to save his him. While he succeeded in getting into the room to save his father-in-law, but they were both trapped inside until the building caved in. Fatimo’s father died on the spot, her husband was later saved from the rubbles, but unfortunately died in the hospital.

Fatimo who was profusely crying said the family rented the mini flat two years ago and renewed their annual rent three days before the incident, ‘’We paid an annual rent of N120,000 and the last one was paid on Monday July 8, 2013. I lived on the next street until I had an accommodation problem and we parked into the mini flat. The house was quite affordable to many but the incident had dealt a blow on me. All our property are gone and where do I start from…?’’, she lamented.

When she was asked why she moved into the apartment inspite of the cracks all over the building, she said, ‘’the building was in a good shape and I wouldn’t have parked in if I knew it was substandard?’’

She spoke well of her landlord, “he was nice to us. For instance, he used to exercise patience with his tenants in case they are owing rent. Also, the rent was affordable to many but the bone of contention is that we have just paid another rent last Monday which expires in June 2014. I have lost two prominent people in my life, had I known, I would have had a second thought”, she said.