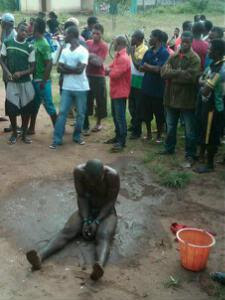 Police patrol team in Bayelsa over the weekend saved a man from being killed by an angry crowd for allegedly raping a 13-year-old girl along Akenfa area of Yenagoa.

Investigation revealed that 35-year-old Akpobomei (surname withheld) was apprehended by the angry crowd after defiling the girl.

Checks indicated that the victim was lured out of her parents’ home by the suspected rapist with sweet and warned her not to inform the parents of the atrocity.

The Police spokesman in the state, Astimin Butswat, who confirmed the incident, said: “On October 4 at about 9.30p.m, policemen attached to the Special Anti-Robbery Squad (SARS), Yenagoa, responded to a distress call from residents of Akenfa 1 community, Yenagoa.

“On arrival, they met an irate mob attacking one Akpobomei aged 35 for allegedly raping a 13- year- old girl. The suspect was rescued and was subsequently detained.”

In another development, three suspected armed robbers, who allegedly rode in a tricycle to rob innocent passengers, were rescued from being lynched by a mob in Amarata community in the state at about noon yesterday.

According to an eyewitness, Solo, the suspects were chased by the angry crowd after the alarm raised by the victim, who was pushed out of a moving tricycle after being dispossessed of her cash and valuables along Imgbi road axis of Amarata community in the state capital.

One of the witnesses said:

“People around the area suddenly saw a man being thrown out of a moving ‘Keke Napep’ and he raised the alarm that thieves had dispossessed him of huge sum of money. Two commercial tricyclists and a car gave the tricycle a hot chase and apprehended the suspects at the Imgbi road roundabout. Before the mob could descend on them, armed policemen came to their rescue.”

Butswat commended the commitment of members of the public in assisting the police in fighting crime in the state, but appealed to them to desist from beating suspects.