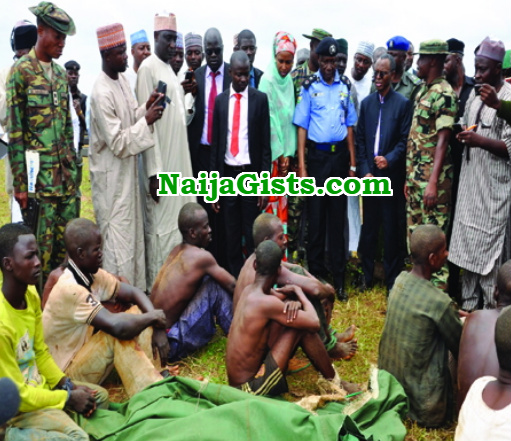 Survey has revealed that most of the Small Arms and Light Weapons (SALW) smuggled from the Maghreb due to the Arab Spring uprising and the activities of Al-Qaeda find their way into the country through migrant, transhumance activities, such as animals, articles, vehicles trading into the country via Libya -Sudan -Mali-Chad-Niger and finally-Nigeria.

Our findings revealed further that a lot of these SALW are procured in those countries and sent to Nigeria because of the big criminal market of armed robbery, cattle rustling, kidnapping, bunkering, Niger Delta militancy and herdsmen/farmers’ crises, amongst others.

As a former national secretary of the Miyetti Allah Cattle Breeders’ Association, my first experience 27 years ago of violent conflict between herdsmen and farmers was the communal clash between the Fulani and the Berom in Sho village of Barkin Ladi, Plateau State and the Tiv/Fulani communal ghastly conflict in Jangargari, then still part of Plateau State but now Nasarawa State.

This was when I had my first baptism of fire and blood in the hands of Nigerians and how far they could degenerate into lawless and bloodshed over ethnic and religious sentiments!

Any crisis that would last 27 years in any part of a country, such problem is bound to have a multiplier effect that may engulf the entire nation. The farmers/herdsmen crises have since assumed a national dimension, resulting into the mass movement of displaced and dislodged herdsmen from all over the country into Kamuku Forest amongst others.

All Fulani clans in the country, from Borno to Cross River, from Zamfara to Saki in Oyo states are today found in Kamuku Forest either as outlaws or law-abiding citizens, forced to live with the outlaws, out of no choice of theirs.

From rough estimates emanating from the leadership of the herdsmen, over five million heads of cattle and 3500 herdsmen were killed and over one million displaced within this period in question.

Little wonder, therefore, that any forests, large expanse of bushes or land that lay fallow would inevitably be turned into herdsmen home. And as bona fide Nigerians they would exert their rights to such areas as their home. Other Nigerians, the so-called natives would spring from nowhere and scream blue murder that jihadists and aliens from another planet had invaded their God-given “native land”.

And without the intervention of the government and security agents, the stage for bloodshed and an endless violent feud would have been set. Without the provision of an alternative grazing space for the herdsmen who feel it is their right to graze their animals in order for them to fend for themselves and their offspring, the herdsmen often seek for means and ways to defend themselves and their animals.

This is where the problem of the procurement and possession of firearms comes in. The herdsmen, having witnessed the efficacy of these arms against them when their enemies struck, are more desirous of possessing them now than ever before.

At the end of the day such arms are used either for self- defence or aggression, depending on what the sociology of the society is or what it transmutes into. In most cases such a society becomes a haven for all criminal activities and lawlessness.

Kamuku Forest is a typical example of such an environment which has become the fortress of the oppressed, the displaced, the maimed, the dispossessed, the poor and the orphans of those murdered in cold blood, in their struggles to defend their tribe, faith and their means of livelihood nationwide.

In October 2011, a former highly respected security chief called me and introduced me to Governor Abdul-aziz Yari of Zamfara State and pleaded with me to go to Gusau and see what I could do to put out the fire that was burning between the Fulani herdsmen and Hausa farmers in Dansadau LGA.

Over 100 herdsmen had lost their lives and they were on a very deadly, unstoppable reprisal mission. The herdsmen had almost entirely left the LGA and even the state to other LGAs and states. I knew what danger lay ahead when these people pulled out of any area in this manner. It is not for nothing but the launching of a long drawn deadly reprisal attack.

This is the most difficult period to handle any crisis involving the Fulani because at this point they would have taken their irrevocable decision already, having nothing more to lose. At this point, you would find out that they had cut off all their communication channels and are now incommunicado.

By the time I arrived most of them had entered Katsina, Niger, Kaduna, Kebbi and Sokoto states amongst others. The reprisal attackers had taken camps in Kamuku Forest. They already had their supplies of arms, food and means of transport. Reversing their reprisal assault was almost impossible.

Having received, in most cases, the blessings of their parents and leaders, having also incurred expenses for the assignment, going back was not an alternative on their agenda. However, I was lucky; there was this son of the herdsmen who worked as a journalist in the state who knew me well to trust me. This was the guy that facilitated my getting across to these herdsmen and their leaders. Within two days, I had attended three meetings with them and had listened, with real and sympathetic interest, to their stories, gory tales and memories of what happened to them.

One thing they keep on harping on and emphasizing was the refusal of the government to acknowledge their losses in both human and animal lives in the violent crisis between them and the Hausa. And this was their biggest grievance that was making them unmanageable and inconsolable in their resolve to take revenge.

They particularly painted the pictures of how government came to the rescue of the Hausa with relief materials and gave a lot of media coverage to their (Hausa) losses in the crisis without saying a word about them (herdsmen). They were so pained by this that I had to be careful not to allow them know I was there on behalf of the government, especially as I had no defence for the government on this.

I prepared an interim report immediately to the government and proffered steps and solutions I wanted it to take to curb the impending danger. Chief among which was the immediate provision of relief materials, financial assistance to defray reprisal attack expenditure, the immediate setting up of a reconciliation parley between the two warring groups where they should be given the opportunity to ventilate their bottled-up motions.

The herdsmen seriously believed the government was not only partial but openly in support of the Hausa. They said while the Hausa were given what to eat by the government, they were left to starve to death.

Some of the herdsmen said some of them had already resorted to all forms of criminal acts such as the stealing of the animals of both herdsmen and the Hausa. They said without government intervention, the Fulani, sooner or later, would become permanent thieves as most of them had already lost over 70% of their means of livelihood which is their cattle.

From all indications, the prediction of the Fulani leaders has come to pass. I’m particularly disturbed and worried when I recall that all the suggestions I gave to the government of Zamfara State neither was accepted nor implemented up to the time I had to abandon the assignment in 2012.

From hindsight, I feel had the government listened, may be there would not be Kamuku Forest with so much pains today. From one state in 2011 to five now, only God knows how many states it will be next time. A stitch in time saves nine, goes the adage.

The problem of the herdsmen in Kamuku Forest will not be solved without a lot of deliberations, consultations, high wire, intelligent and fraternal intervention from other herdsmen within and without the forest, especially their trusted and confidant leaders. I strongly advise that these governors should do everything possible not to replicate seven Sambisa Forest in the Kamuku Forest. For now, this is very avoidable.