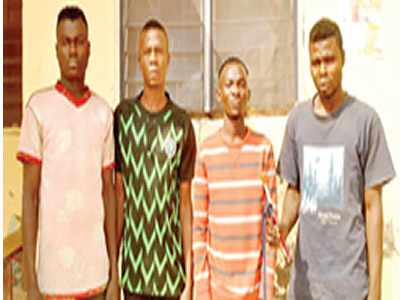 In Niger State, Deadly Thugs Kill Man For Reporting Their Crimes To Police

Niger Police have arrested 4 suspected thugs who allegedly killed a peace maker identified as Shuaibu, a resident of Maitunmbi community in Bosso LGA of Niger state for exposing their criminal activities.

The thugs reportedly stabbed the victim for reporting their dangerous activities to residents of the area.

Shuaibu was beaten up by the thugs, before he was stabbed in the stomach thereby causing him to bleed to death. Policemen stormed the area, arrested the suspects at their meeting point and recovered the knife which they used in stabbing their victim.