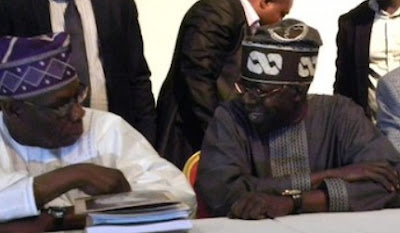 Ashiwaju Bola Tinubu has come for Chief Olusegun Obasanjo who trying to score cheap political point wrote an open letter to Buhari instead of going through the right channel.

Here is what the APC boss told reporters in Owerri Imo state on Friday during the funeral of Alex Ekwueme.

” I think Obasanjo was playing politics with his public letter. That’s all I see.

“He could have used other means; he met him (Buhari) in the AU (Africa Union) too.

“He has a way of discussing privately, but the letter is being responded to by the government.

“Obasanjo wrote it about the government. It is a very good awareness on his part and they are both (Obasanjo and Buhari) from the same background.

“I believe that is the doctrine of military officers (retired) because he has unrestricted access to the President, either through the Council of State or by any other means that he needs to see the current president privately and he was his junior in the army.”

Continue Reading
You may also like...
Related Topics:hypocrite, obasanjo, tinubu

Obasanjo’s CNM Is A Group Of Failed Politicians, He Stole Our Name – CN
Adeboye Condemns Herdsmen Killings, Asks Osinbajo To Pray For Total Destruction Of Sponsors