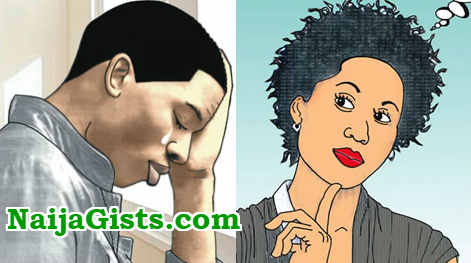 January 6, 2018 – Touching Story Of A Faithful Young Man Who Proposed Marriage To A Prostitute By Mistake

Mr. Chike Okafor was still waiting patiently for Adanma’s arrival right in his humble abode. Only the blind would be yet to observe that the poor man was almost losing his patience. “Where on earth would this woman be?” he thought aloud. Deeply concerned over her welfare. “I pray nothing bad had happened to her.”

He added, still looking pale on one of the upholstery chairs in his sitting room. Chike’s lost of patience, which was accompanied by series of soliloquies, came in subsequence to several aborted efforts he had made to reach the awaited lady on phone.

Adanma was his fiancée, and their church wedding ceremony had been scheduled to take place in two weeks time. Chike came across Adanma in Calabar, Cross-River State barely four months back.

They were both residents of the said city. And luckily for them, they hail from neighbouring states, Enugu and Anambra, respectively. Their relationship commenced jokingly during one fateful weekend, Saturday 24th August 2013 precisely, when Chike drove to one of the hottest joints in the city to have some drinks.

Having parked his Red Toyota Camry car at the designated spot, the moment he walked into the bar, he abruptly sighted one fair, tall and plump pretty damsel clad in a blue mini-skirt, pink top and a pair of pink sandals who was seated alone at one of the corners in the area.

She was already sipping from a bottle of Smirnoff which was accompanied with a plate of pepper soup. Amazingly, within a twinkle of an eye, she saw a slim and chocolate-skinned young man of an average height who appeared to be in his late thirties standing right before her. He was putting on a pair of three-quarter jeans, green T-shirt and a pair of leather slippers, coupled with a multiplecoloured baseball cap.

“Hi!” He exclaimed cheerfully. “Hello!” the lady whom seemed to be in her early thirties responded accordingly. “I am Chike,” he informed. “Chike Okafor.” He added, still standing. “Ok, Adanma.” She said, placing her left palm on her chest.

“Are you waiting for someone?” “Not at all” “Can I join you?” the dude requested. “Suit yourself.” She replied in a very friendly manner. Chike joyfully sat on the white plastic seat positioned directly opposite her. “You are really beautiful; I must confess.” He quickly dished out.

“Thanks” Adanma gladly appreciated. He didn’t hesitate to order for his own drink, bottle of Star to be precise, coupled with a plate of pepper soup to balance the equation.

The conversation lasted for over one hour after exchange of several pleasantries including phone numbers and what have you. After all said and done, Chike gladly dropped her at her place of residence at about quarter to seven in the evening (6:45pm). Exactly two months after their meeting, they got engaged.

On the third month, Chike joyfully took his kinsmen to Anambra State to pay her bride price. According to Chike’s faith alongside that of his family, he was not meant to live with her after observing the traditional marriage rite until he had successfully taken her to the altar. That very fateful day, which marked exactly two weeks to their wedding, Chike was anxiously waiting for Adanma’s arrival because she was already two hours behind schedule.

Both of them had earlier agreed to meet on that day at his place by four O’clock in the afternoon in regard to the proceedings of their forthcoming wedding ceremony. But as at ten minutes past six in the evening (6:10pm), Adanma was yet to arrive.

The young man tried many times to reach her on phone, all to no avail. Having dosed off on the upholstery seat, at about two minutes past seven at night, Chike’s door bell rang.

On receipt of the blaring sound of the bell, Chike walked reluctantly to the door. “Who’s that?” He queried in a low tone. “It’s me, Adanma.” As soon as the name ‘Adanma’ was mentioned, the door was widely let open. “Baby, are you okay?” Chike worriedly asked. “I’ve been trying your line but it was switched off.”

Adanma, speechless; appeared tired and exhausted. She quietly walked to one of the seats in the sitting room and lousily sat on it, looking pale. Chike followed suit having closed the door. He was seated adjacent to her. “Baby talk to me,” he tenderly urged. “What’s wrong with you?” “Honey, I had a very busy day.” she eventually responded.

“I worked overtime in the office.” She lied. Adanma had falsely informed Chike that she works in one of the telecommunication firms in the city. And Chike, having trusted her, never cared to go for further enquiries on what she actually did for a living.

“Oh, so sorry about that.” Chike uttered. “That’s company work for you. They will stress you, exploit you, and at the end, you would be paid peanut.” He added. “Yes, you are absolutely right.” Adanma complimented. “I wish I’m a civil servant like you.”

Mr. Chike Okafor who was a graduate of Business Administration from the University of Port- Harcourt, was a successful civil servant. He was engaged with the Cross-River State Ministry of Finance.

Whilst, Adanma was a dropout from one of the Polytechnics in Nigeria. But she lied to Chike that she had a Higher National Diploma (HND) in Marketing. On that very day, she passed her night at Chike’s place and left for her place the following day. Three days on, which was barely eleven days to the proposed wedding ceremony, something very terrible transpired. On that day, Chike got an indelible and unimaginable experience in his lifetime.

After office time, he was slowly driving along one of the busy streets in Calabar metropolis to purchase some fruits, as usual, for himself as well as his fiancée at about some minutes past five in the evening.

Surprisingly, he noticed someone who appeared like Adanma, and the lady in question was walking into a certain brothel situated along the street. He quickly stopped his car and hurriedly walked out. On reaching the main entrance to the brothel, he saw a life image that gave him the greatest shock of his life. Frankly, the lady he saw while in his car was really Adanma and no one else.

This time, she was facing him, though from afar. She was almost nude. Little did Chike know that his so-called bride to-be had been a prostitute in disguise all those while. He couldn’t believe his sight. It was like a dream. He stood still, seemed froze. On her part, virtually all her face was covered with fathomless tears while standing like an electrocuted vulture.

Continue Reading
You may also like...
Related Topics:marriage, propose, prostitute