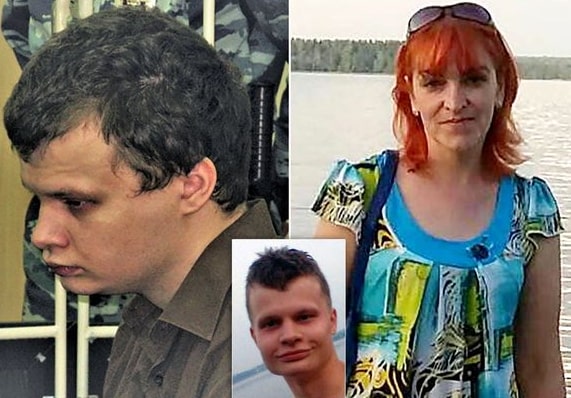 A notorious cannibal who killed his lover, roasted and ate her brain then drank her blood and tried to summon the devil, has been jailed for 19 years in Russia.

According to The Daily Mail, 23-year-old Dmitry Luchin brutally killed his older lover, Olga Budunova, 45, hitting her head with a wine bottle before dismembering her body with a meat cleaver.

He reportedly went ahead to tear out her insides, a court in Novgorod was told.

Luchin also daubed swear words, including the word ‘whore’ on her body in blood and purple-coloured nail polish.

He was found guilty of murder committed with special cruelty and would serve his sentence in a harsh regime penal colony.

The young man, who had been declared mentally fit to stand trial, read a bizarre poem to the court in which he denied that he was a maniac, murderer and cannibal.

He had carefully planned the ‘ritualistic cannibalistic murder’ after becoming obsessed with reading about serial killers on the web, alleged prosecutors during his trial.

He admitted to police that he got sexual pleasure from the attack, although he later retracted his confession of guilt, after a crime scene re-enactment in which he showed police how he killed and dismembered the woman.

Budunova was killed after her ‘toy boy lover’ went to her flat in Valdai for ‘romantic’ drinks to mark International Women’s Day, a major public holiday in Russia, Daily Mail UK, reports.

Alexandra Dedova, 21, a neighbour, who witnessed the grotesque crime scene soon after the murder, was present at Luchin’s initial police interrogation.

“He wanted to summon the devil. He waited for five minutes but the devil did not appear.

“Next he took the meat cleaver and smashed her skull. He cut pieces out of her brain. He roasted and ate them. He liked it. He ate another piece. Then poured a glass of her blood and drank.

“Next he cut out her stomach and chopped off her ears. One he put into her mouth, the other into the cat’s bowl.”