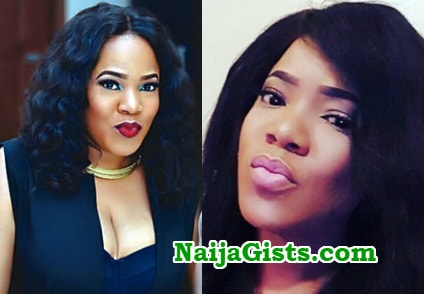 Top Nollywood actress and filmmaker Toyin Abraham is a beautiful woman who has almost everything in the right proportion, but, if what she said on Blessing Nkechi Sunday’s Instagram page is anything to go by, the actress may just be craving for something she believes Mother Nature has not been kind enough to bless her with.

The revelation came to light when another actress, Sunday Nkechi Blessing announced on her Instagram page that she would be selling bum booster and asked anyone who wanted their bum bigger to indicate interest. Pronto, it was Toyin Abraham who first indicated interest and it didn’t sound like she was joking.

“Can I get it please,” she replied.

In today’s world, it is common among celebrities to go all out to achieve the kind of looks they desire.

Those that were not born with big boobs have gone for it, thanks to plastic surgery. And same goes for the bum as well. Many stars in Nollywood are known to have done butt jobs, either to make their butt bigger or more shapely.