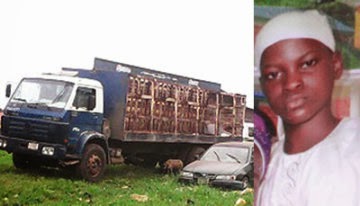 Last Tuesday afternoon, a fully loaded Pepsi truck crushed an innocent pupil to death on Ireshe Road area of Ikorodu Lagos as he was heading home from school.

The skull  of 10-year-old Toheeb Abdullahi was smashed by the rear tire of the truck carrying crates of Pepsi soft drinks.

An eyewitness, Suraju Sumonu, said “The kids were coming back from school when the rough edge of the Pepsi truck hooked the boy’s shirt.

“There was traffic on the road, so the driver of the truck did not know what had happened. He drove forward without knowing the boy had fallen on the ground and his head close to the tyre.

“The truck broke the boy’s skull. It was such a gory sight that people had to quickly cover the dead body with cardboards.”

The driver of the truck was arrested on the spot and taken to Igbogbo police station.