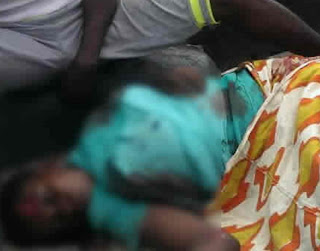 2 other persons were seriously injured in the accident that occurred at Orile – Elmo village along Abeokuta – Sagamu expressway.

According to the Nation, the truck marked PKP 464 XA, crushed the woman and injured two others while they were crossing the road at 9:15 a.m.

Ogun State traffic agency (TRACE) spokesperson, Babatunde Akinbiyi, said the woman died on the spot while the driver of the truck ran away.

Akinbiyi said policemen are making efforts to evacuate the truck off the road.

“Reckless driving caused the accident. The truck ran over the woman while attempting to cross the road to other side of the Siun road. The remains of the woman had been handed over to family,” he said.