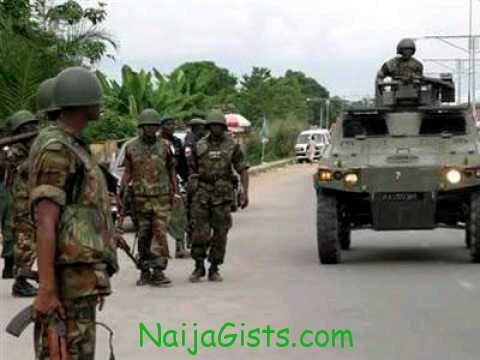 It was not always expected that President Goodluck Jonathan would know the mature, statesmanlike thing to do at a time of grave national crisis, but by deploying troops in the streets of Lagos and some other Nigerian cities, by occupying Gani Fawehinmi Park (the cynosure of modern form of dissent), and by using clearly unconstitutional means to smother legitimate protests, the president has intentionally but informally declared a state of emergency in Lagos State and other states where troops were deployed yesterday. By today, it will be determined whether the statement issued by the state government against that unwholesome act was strongly worded enough. naijagists.com

The deployment of troops in a democracy and at a time when there was no general breakdown of law and order exposed the sham Nigerian democracy has become, and amounted to intimidation and a declaration of war on both the people and the constitution. The Jonathan government intended the deployment to scuttle street protests, take the bite out of the rallies against fuel price hike that had caught the attention of the world, and ensure that the new N97/litre price of petrol announced in the wee hours of yesterday stood a chance of being accepted. The government has shown no qualms about the economic consequences that will hit the country in the coming months and years like a bomb, nor did it fail to exult in spite of the gloom the troop deployment cast on the nation.

But by deploying troops, Jonathan simply upped the ante, moved closer to the spirit of the Arab Spring, angered the people the more, and made his fuel subsidy measure even more difficult to tolerate. The major disconnect between the people and their governments will gradually ossify into a chasm in the coming years. Protests are a part of the dynamics of helping a society achieve balance and equilibrium. Without that balance, a government could be tempted to go too far, and an unsound policy could ruin a country. Unfortunately, a problem that was essentially limited to fuel price hike has now expanded into other more contentious issues involving presidential assault on the constitution. From zoning crisis within the Peoples Democratic Party (PDP) to Boko Haram and on to subsidy controversy, the president not only took the country on a merry-go-round culminating in a constitutional crisis, he has also completely forsworn democratic governance and embraced authoritarian rule.

The labour union and civil societies will be under pressure to respond in a way that will leave them with a fair dose of credibility and integrity. With labour implicitly accepting the new price and suspending street protests, it put in jeopardy future collaborations between it and members of the public who could lend  muscle and credibility to future protests. The public now knows where it stands with labour. It may also be morale dampening to protesters in some parts of the country that the first time a productive relationship would be fashioned between the two groups, it ended anti-climactically. While the NLC/TUC strike lasted, that relationship was amorphous, with many snorting that the protest, particularly in Lagos where it was highly effective last week, had been hijacked by political interest groups, especially the Congress for Progressive Change (CPC).

In the light of the NLC action, civil society groups will come under pressure to formulate new approaches to national crises. They had foreseen since last week that the Jonathan government seemed irretrievably lost, irrational, and prone to excessive measures. They also foresaw the more worrisome problem of collusion between the federal and state governments over the subsidy issue, with some protesters becoming uncomfortable with the backward-looking steps taken by some state governments against constitutionally-sanctioned protests and the surreptitious and in some cases open betrayal by supposedly pro-masses governors. The civil society groups in fact openly worried last week that if Nigerians must guarantee the safety of their democracy, then they must be prepared to do much more than just secure reversal of fuel price to N65/litre.

The truce that led to the suspension of the NLC strike was largely the effort of the National Assembly. The Federal Government, uncharacteristically of a responsive government, sulked that the protests were gaining strength. But in brokering dialogue between the government and labour, the legislature elevated the principles of compromise far above the principles of lawmaking, and the spirit of mediation more than the spirit of checks and balances. The country will see more of such despairing compromises between the Executive and the Legislature in the coming months, even as the quality of governance decline alarmingly. For the sake of what they all refer to as peace and stability, they will continue to compromise, fail to ask the right questions, avoid deep probes, incrementally whittle down the ingredients that make for real democracy and good governance, and connive at the kind of withering assault against democracy unleashed by the Jonathan civilian dictatorship.

Since 1999, no true or even aspiring democrat has had the opportunity of heading the Federal Government. It is, therefore, not surprising that both Olusegun Obasanjo and Jonathan failed to understand its sublime dynamics and the physical and metaphysical bonding required to nurture and sustain it. It was expected that given the plethora of philosophers and scientists in the National Assembly, they would recognise the spiritual and moral crises the country faced last week as a result of the subsidy controversy. If they did, they would have curbed Jonathan’s dictatorial tendencies and restored their own powers which the president appeared to have taken for granted. The significance of the moment was lost on them. It is unlikely to be regained soon.

It is suggested that the acceptance of N97/litre is victory for both labour and the president. More, it is thought to be victory for Nigerians who have proved they can no longer be taken for granted. This is sentimental hogwash. The truth is much harsher than that. Not only has Jonathan taken the measure of Nigerians and found them to be of poor mettle; not only has he outflanked labour, seduced and demystified opposition parties, and flattered and weakened the National Assembly, he has also more crucially discovered that his powers are as elastic as he can conjure and that the constitution cannot really circumscribe his anti-democratic imaginations. In the coming months, since he knows little about the transcendentalism of the constitution, he will test its elasticity the more and, if necessary, whimsically call out troops to enforce unpopular measures.

Perhaps the most important immediate casualty of the suspension of the strike before real victory was achieved is the abortion of the new culture of popular, supra-ethnic and supra-religious protests which would have helped democracy to develop and blossom. Most protesters, particularly the middle class who attended in great numbers, will be disenchanted, indeed disgusted, that it ended anti-climactically. The next elections will test how far that disgust can be harnessed against pretentious parties and feckless politicians who have not shown the character of greatness.

About 18 years ago, Nigerians were tantalisingly poised on the edge of a major political breakthrough when a Muslim-Muslim ticket won the June 12, 1993 presidential election. That miracle was also aborted. How many such abortions a country can take in one generation is difficult to estimate. Now that protests cannot be conducted openly and peacefully as guaranteed by the constitution, protesters and disgruntled elements may head for the underground in the coming years as more people lose faith in both the country that has alienated them economically and a democracy that has proved to be leprous.