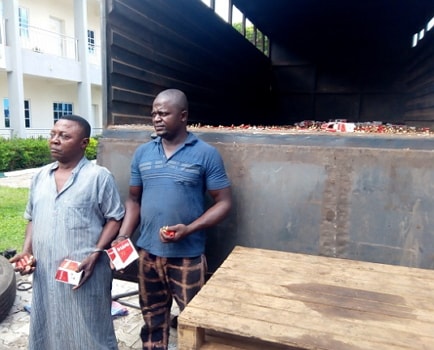 The Nigeria Customs  has intercepted a Onitsha bound truck load of 200,000 live ammunition being brought into the country from Benin Republic.

2 suspects who were identified as the driver, Bukari Dauda and the owner of the cartridges, Martin Anokwara were apprehended along the Wawa – Babana border in Niger state in a Iveco Truck with Lagos registration number AKD 904 XE

According to the Command Controller, Comptroller Benjamin Binga said that his men intercepted the truck which entered the country through the Babana border at about 3 a.m on Monday morning.

He said that the truck was disguised to be carrying over 100 empty gericans but on thorough checking, it was discovered that the truck had a false bottom which was used to hide the cartridges.

“The checking was not from tip off, it was just out of sheer curiosity that my men decided to do a thorough checking and discovered that unlike other bottoms of trucks, this one had nuts and on removing the nuts, they discovered it was a false bottom which revealed the cartridges.

“The cartridges are numbering thousands, it would take us hours to count it. We are now working to establish what the cartridges are really meant for and who sent them to bring it into the country. ”

Interrogating the suspects, the driver of the truck, Bukari Dauda said he is from Cotonu in Benin Republic and he was employed by the driver, Martin Anokwara to drive the truck for him to Onitsha.

Dauda said that he did not know the truck contained live cartridges as Martin only told him he wanted to take the empty gericans back to the Nigeria.

According to him, he supplies hunters and licensed owners of double barrel guns adding that he only sells them in Anambra. 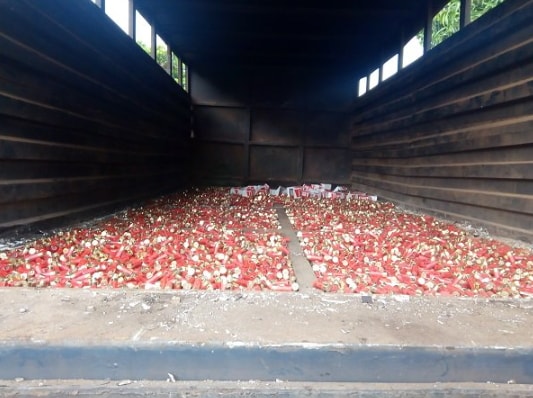 Martin explained that the driver of the truck fell sick which made him contract Dauda to drive him back to Nigeria saying that they had entered the country before they were apprehended by the customs.

The Customs Controller of the Niger, Kwara and Kogi Commamd said that they would be interrogated before they are charged to court.